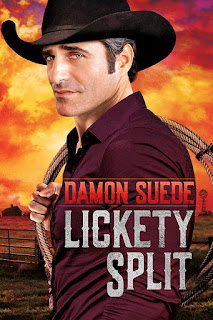 Tucker whistled between his teeth and stepped close. "I swear. You give me urges, pup."

"Oh yeah?" He wasn't too proud to fish for a compliment. "What kind of urges?"

"Strong ones." Tucker shook his head.

Lickety Split is my first ever Damon Suede read--although I did buy Hot Head from Dreamspinner a couple of years ago but haven't gotten around to reading it yet (yes, yes, I'm a book hoarder)--but damn, it certainly won't be my last. I'm not sure exactly what I was expecting but this was the best kind of surprise. It was hot and heavy but it also had the kind of story that you want to sink your teeth into, just as much as I'm sure both Patrick "Patch" Hastle and Tucker Biggs wanted to sink...other things...into...well, you get the picture. A May-December romance that was raunchy and dirty and intoxicatingly addictive, I'm already putting this out there: it's one of my top 2017 favorites!

When Patch Hastle learns of his parents passing courtesy of one ill-timed race with a train that his father--who was behind the wheel of their vehicle--lost, all he wanted was to pack up the home he had no choice but to leave seven years ago, sell the farm, and return to New York to focus on his job as a DJ and start work on the club he's been dreaming of with his closest friend. The last thing he wants to do is spend time reminiscing with his father's best friend--the man he crushed on as a teenager, the same one who made his life hell before Patch left Hixville, Texas.

Tucker Biggs's life has been at a standstill for years. The Hastle farm has been the one place where he felt settled, becoming its caretaker. With the death of his best friend and his best friend's wife, Tucker is unsure what the couple's only child plans to do with the farm. He knows Patch has a life in the city and it's pretty obvious that Patch still hates him. He's prepared to help Patch with anything he may need regarding the farm--even ready to leave should Patch decide to sell--but what he isn't prepared for is to see just how grown up the former troublemaker is.

I seriously loved these two together! Patch is twenty-two and Tucker is forty-three, and while a little over two decades may seem like too large an age gap for some (not me!), the fact that this old dog was able to teach his young pup a kink or two should be enticing enough. There's a love-hate thing that goes on for quite a while, brought about by Tucker's not-so-great treatment of Patch as a gay teen. The fact that Tucker turns out to be bisexual, is a shock to young Patch who thought otherwise. But goodness, these two were hot together. Like sizzling. And super filthy. And I couldn't get enough of them, so I couldn't believe it was over even after 265 pages.

Let me reiterate that there's more to this book than the sex. This was a slow burn romance because Patch and Tucker did have issues, and there was a bit of one step forward, two steps back going on because of it. There's one particular point in the story where my heart clenched tightly in my chest because it was Tucker at his rawest and him being completely real with Patch. This is the kind of book where you want them to have a happy ending because they both deserve it. But does Patch move back to Texas permanently or does Tucker move to New York for his pup? I guess you'll have to read Lickety Split to find out. It'll so put you on the edge. *wink* Five-plus stars. ♥