Review: All I Need by Callie Harper (All In #4) 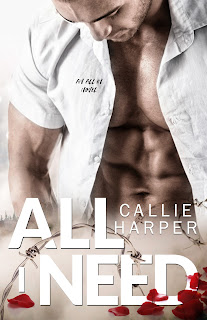 Callie Harper ends her All In series with the fourth and final member of the foursome who started their adventure by taking a boat that didn't belong to them and it all ending in a traumatizing event. All I Need is Ian Douglas's story, Ian being the one who suffered most after the boating he and his three closest friends were involved in when they were all fourteen. He carries with him physical scars of not just the accident but the ordeal his body has been through since. But it's not merely the physical evidence of everything he's experienced that gets to him. Mentally, Ian is not the same kid he once was, and his father fears what may come should Ian continue to spiral downward. Enter Annie Mitchell, who is hired as a caregiver for Ian, a move he isn't too thrilled about nor receptive of. He pushes her every button, hoping to break her and send her away, but Annie is made of far sturdier stuff than even she herself could have imagined. She needs this job and she intends to stay, and the longer she's around Ian, the more she gets to know the broken man she's growing to love. Annie needs Ian, but will he own up to needing her?

The author certainly doesn't disappoint with Ian and Annie's story, especially since it was Ian who was left in wheelchair for a good, long while after the accident that changed his life and that of his three friends--all of whom got their happy endings in the first three novels in the series, In Deep, All of Me, and All of You. Ian's attitude was understandable, and while it's easy to say that many years had passed since the accident, certain things stay with you, especially when you see evidence of what happened on a daily basis. As strong as Ian's personality was, I loved that Annie gave as good as she got. She found her own footing in this story, refusing to back down and allow Ian to run roughshod on her. The evolution of their romance was heartrending read, one that had its ups and downs, and while Ian never wanted to rely on anyone, he learned that it was okay to lean on those who cared most about him because they needed to take care of him, as much for their own benefit as for his. I really enjoyed reading All I Need and I think it's an excellent note to end All In on. I'm giving this series ender 4.5 out of five stars. ♥

Read my reviews for the All In series: