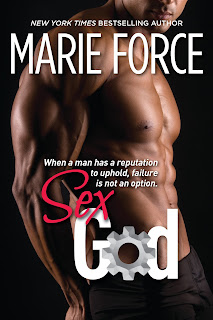 Oh my. A sex god disguised as a mild-mannered accountant. Who would have thought I'd fall for such a guy, but I did, courtesy of Marie Force's latest rom-com release set in the town of Marfa, Texas, Sex God. This is the second book featuring the West Texas town, so for my own cataloging and categorizing purposes, I've started calling the interconnected stories Marfa, Texas because...well...that's where they take place. Neat, huh? *cough* Anyhoo, this second book has two more members of the close-knit group of best friends who have known each other since childhood, sex god numbers cruncher Garrett McKinley and sinfully sweet florist Lauren Davies. The mutual crush they had on each other was made known in the first book, Sex Machine, and now they explore their new options...

Their first time together was unforgettable...in the worst possible way. Six months later, Garrett McKinley and Lauren Davies's friendship survived that sexual mishap, but Garrett thinks it's time to give it another shot. He's had a thing for Lauren since the sixth grade, and Lauren's always thought of Garrett as the guy for her. Circumstances may have gotten in their way, but now, they're willing to see if taking that next step will be worth it. There's a great deal of pressure on them, what with their friends insisting that they've always been perfect for each other. Garrett's asking for one week to convince Lauren that they'd be good together...but Garrett also has plans beyond that one week--plans that involve him moving beyond and away from Marfa, and possibly, the only girl he's loved.

If I thought Blake and Honey Dempsey were hot in book, well, Garrett and Lauren were of a completely different level heat-wise. These two were deliciously dirty and romantically raunchy. I liked that there wasn't all this pussyfooting going on with how they felt about each other and I think it was adorable when they confessed said feelings. The one sticking point to their road to happily-ever-after was Garrett's plans for the future. After all, he had his whole life ahead of him, but then his father suddenly died and duty to his family came first. Garrett stumbles a bit, but how can you stay mad at a man who owns up to his shortcomings and strives to make it better? I need more and I hope we get Julie and Matt's story too (even if they are already married). Sex God gets five stars. ♥

Read my reviews for the Marfa, Texas books: