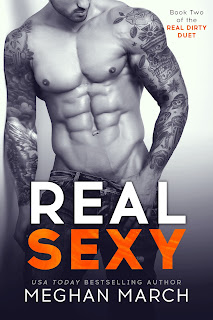 
Just when things were getting REALLY good, Real Dirty ended in a cliffhanger, but Meghan March made sure the wait was worth it because Real Sexy was REALLY fantastic and was the perfect way to wrap things up in the Real Dirty duet. Last we saw the new maybe couple of country superstar Boone Thrasher and bartender Ripley Fischer, Boone had just been informed that the police were there to take him, bringing with them a warrant for his arrest. Book two picks up immediately where book one left off. With Boone landing in jail for something he didn't do, Ripley wants to be able to help the man she's falling for. Except, how real can this thing between them be and how long could it possibly last? After all, he's got the world at his fingertips and she's barely keeping a hold on her world as she knows it. The thing is, Boone knows who he wants; it's Ripley--and no one and nothing can stand in his way.

Ah, Boone, Boone, Boone. The man went above and beyond, turning out to be a true bad boy between the sheets but one heck of a good guy outside of the bedroom, romancing Ripley--who seriously needed it--and proving to her that while fast, whatever was happening to them was for keeps. He's a countrified alpha, but he isn't domineering or thinks of Ripley as helpless. If anything, he recognizes how independent his woman is and that she's more than capable of leading her life, but what he wants her to realize is that he isn't going anywhere and that she can lean on him whenever and wherever. I liked that these two didn't hold back once they trusted each other, and it was almost like verbal foreplay. When these two were together--as in together *wink, wink*--Meghan March shows everyone why her books are among the steamiest and dirtiest that line many romance bookshelves.

This second book in the duet took things up a couple of notches and we FINALLY learn the truth about what happened to Ripley's mother. I had my suspicions but I was surprised by the motivation behind what this person did. The steam, romance, and humor--and yes, that bit of angst that I always need in the books I read--were all there in full force and we even see some familiar faces, and if you're a fan of all things Meghan March, stuff like these cameo appearances always feel like such a bonus. The next Real/Dirty (because we did start out with Dirty and then it became Real and now I guess, everything is Real/Dirty) release will be about a character I wasn't expecting but I'm excited to read about. There's another character in the Real Dirty duet that I'm hoping will also get his own happy ending *coughZANEcough*. Again, Meghan March left readers sated with Real Sexy. Five stars. ♥

Read my reviews for the Real Dirty series: