Review: Use Me by MJ Fields & Chelsea Camaron (Caldwell Brothers #4) 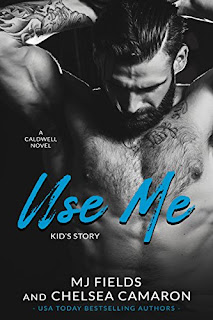 Use Me is a spin-off novel in the Caldwell Brothers series from the bestselling writing duo of MJ Fields and Chelsea Camaron. If you're familiar with the original series, a supporting character named Kid was introduced in the third book, Jagger. Now, he's got his own story and we find out that his name is Michelangelo Mazzini, aka Angelo, a twenty-five-year-old former convict who was bequeathed the gym owned by Old Man Shaw, Jagger Caldwell's trainer and best friend to Angelo's late father. Angelo prefers to limit his interactions with people as much as he can. He doesn't like to talk nor does he like to be touched. It's better this way. He's the bane of anyone's existence. But thirty-one-year-old author bestselling author Tatum Langley clearly hasn't gotten the memo and she refuses to be cowed by the brusque and burly gym owner. She needs a muse as her editor encourages--insists--she shift from writing non-fiction to fiction and she finds it in Angelo. There's a darkness to him but she sees a sliver of light underneath. Is Tatum's love enough to pull Angelo into the light or will he be the one dragging her into the dark?

Just like the three Caldwell brothers, Angelo has a dark past that he feels bound to, so there's a fair bit of angst in this story, but I love how MJ Fields and Chelsea Camaron were able to balance it out with romance and sex--and it's the hottest sex so far in the series. Finding out what made Angelo into the brooding man he is today was heartrending, but the way that Tatum is able to make him see the person he is today in a different light had me recognizing how well these two fit together. I liked the use of Breathe Again, the romance novel that Tatum is working on and that Angelo reads, and how it brings the two of them closer, almost as if it's their way of communicating whatever's going on in their heads and hearts. This is a free read and while you don't necessarily need to read it to fully appreciate Use Me, it IS a good read in and of itself and it's novella in length so it's a risk-free thing. Overall, I'd have to say that Use Me is a notch or two above the first three books in the series, and it's a great start to this new spin-off stories set in the world of the Caldwells before them. This gets 4.5 out of five stars. ♥

Read my reviews for the Caldwell Brothers series: