Review: Enemy Within by Tal Bauer (The Executive Office #3) 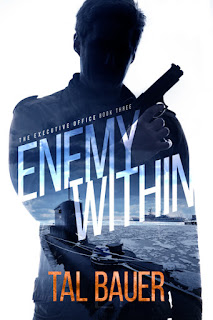 Jack stared down at his hands, at the twinkle of his wedding ring. The world seemed to tilt, tip over sideways. His stomach wrenched, a gut-punch to the center of his soul. He’d been a lifelong public servant, had built a career out of wanting to do the right thing. Wanting to make the world better. But everything he’d done was dissolving, every choice he’d made washed in bitter recriminations. His actions were being picked apart by people who hadn’t been there, who hadn’t seen what he’d seen, or felt what he’d felt. Who hadn’t had to weigh the world against the love of his life and make a choice with a gun to his heart. Who didn’t have to live with choices that could break a man in two. Grief, aching, swelling grief roared through him. The recitation of his sins, the public indictment of his character, was like a claw gouging his soul, hollowing him out with every word.

Is this really? Really?! Gah! I can't believe this is the end, and damn, it's a bittersweet one. I'm absolutely gobsmacked with how frickin' amazing this novel is, but then I shouldn't be since this had Tal Bauer's jaw-dropping awe-inspiring writing all over and then some. Enemy Within was everything I thought it would be and yet Bauer managed to surprise me more than once with the direction he took this novel that concludes one of the very best romantic political suspense thrillers series I've ever had the privilege of reading. It's smart and sexy and just downright scintillating as Jack Spiers and Ethan Reichenbach are no longer trying to be one step ahead of the traitor that is Porter Madigan but needing to catch up before they're completely buried in all the upheaval that Madigan and his minions have left in their wake. This was such a suspenseful read that I seriously needed a puff from my asthma inhaler a time or two! Suffice it to say that I was all in with the novel, but then what do you expect when the author has had me hooked from the first book and has been oh-so-ingenuously reeling me in ever since?

I'm not going to give any plot details in this review. What I will say is that you need to read the series in order. Yes, the full-length novels aren't exactly quick reads, but they're worth the time you put int them and for you to fully experience what the series is about and to truly appreciate it, reading from the recently released special edition of Enemies of the State until the fourth and final release in the series, Enemy Within, is highly recommended. The series may have the romance between central characters US President Jack Spiers and First Gentleman Ethan Reichenbach at its core, but the peripheral characters, especially the Service Secret agents who are with them and are led by Agent Scott Collard, and the other couples we've come to have affection for--Russian President Sergey Puchkov and Sasha Andreyev and Lieutenant Adam Cooper and Prince Faisal al-Saud--shouldn't be discounted because they've driven the story forward and have made the series so much more formidable. Yes, The Executive Office ends here, but something said in the story gives me hope for a spin-off. I sincerely hope you'll do yourselves a favor and read the series. I bought the special edition of EotS and plan on reading it to see what new goodies Tal Bauer has added because I could never get enough of a series as dynamic is this. Five-plus stars for Enemy Within. ♥

Purchase Enemy Within on Amazon | Smashwords.