Review: Enemy of My Enemy by Tal Bauer (The Executive Office #2) 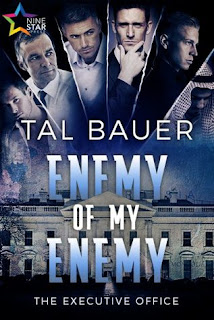 Scott was in front of him, suddenly, his face haggard and wan. Crow’s feet lined with dried mud and hair that stuck up every which way. “Ethan?”

He shook his head, slow jerks back and forth that built until his body was shaking, and he couldn’t hold Scott’s gaze any longer. “It’s over,” he grunted, staring down at Scott’s ruined dress shoes and his mud-splattered suit pants. “We’re over.”

Holy. Crap. This book was...just...WOW. It's been forty-eight hours or so since I read Enemy of My Enemy and even though I've already finished with Enemy Within, the end of The Executive Office series, I'm still trying to wrap my head around everything that happened in the second full-length novel in the series. This had twist after twist that, indeed, twisted me all up inside as I figuratively was on the edge of my seat hoping that President Jack Spiers and his First Gentleman, former Secret Service agent Ethan Reichenbach, would make it out of the complex world of conspiracies and controversies surrounding these two men and those who choose to stand by their side. I already knew that Tal Bauer was a kickass author, but EoME just cemented his position on my list of favorite go-to authors.

Being the President of the United States is difficult enough without having the person you want as your partner scrutinized and gossiped about. But that's what happens when Jack Spiers chooses to share his life with Ethan Reichenbach. Not everyone is thrilled by this turn of events, but Jack and Ethan refuse to be dissuaded, not when they've fallen completely and totally in love with one another. However, the world does not stop for two men in love. Disgraced former general Porter Madigan is still in the wind but the chances of him remaining silent are nil, not when he wants Jack and Ethan to their knees, and the way he decides to make them pay for besting him could very well be the singular thing that could destroy, not just what Jack and Ethan have, but the world as they know it.

There isn't a shadow of a doubt that Tal Bauer does his research and he does it well. But what he does even better is create this gut-wrenching story that at times had me gripping my e-reader so tightly that the tips of my fingers were turning white from the lack of blood flow. This was a political thriller with just the right amount of romance, because, after all, at the very heart of the story--of the series--is the tale of unexpected love that exists between Jack and Ethan. It's what gives them strength, but their enemies also see it as their greatest weakness--one being the other's Achilles' heel. As is with any novel that elements of suspense in it, I can't give away too much of the plot, but trust me when I say that you'll thank me for being a non-spoiler. Enemy of My Enemy gets five-plus stars. ♥