Review: Embrace the Fire by Felice Stevens (Through Hell & Back #3) 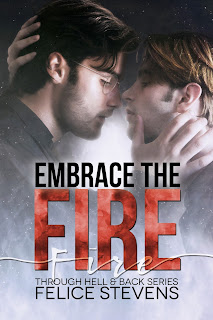 When Brandon Kane's two foster brothers disappeared from his life, not a day went by that he didn't miss them nor wish that they were all together again--the Three Musketeers. At eighteen, he finds himself truly alone on the streets of New York, but a kind and generous soul reaches out and sets him on a path of independence. Seven years later, Brandon is now Randy Gilbert, an elementary school teacher. When a fellow teacher invites him to volunteer in a mentoring program, it's there that he meets psychiatrist Sebastian Weber. Tash is drawn to Brandon, but with Tash being thirty-nine to Brandon's twenty-five, he's wary about getting involved with someone that young. He's already been down that road once before and got his heart shattered in the process. But the heart wants what it wants. Will Tash and Brandon be able to make it past family disapproval and secrets from the past?

The Through Hell & Back series comes to an end with the third novel, Embrace the Fire, and author Felice Stevens knocks it out of the park. She's dotted every single i and crossed each t and has given fans and readers of the series an ending worthy to stand up and cheer for. My favorite thing? It would have to be the series story arc centering on high-powered attorney Asher Davis, financial investor Lucas Conover, and elementary school teacher Brandon Gilbert--with Lucas and Brandon formerly known as Luke Carini and Brandon Kane growing up in foster care--and how everything that needed to be resolved finally was and that these three received the heartwarming endings that they deserved with their respective boyfriends, Dr. Drew Klein, Dr. Jordan Peterson, and Dr. Sebastian Weber. An added bonus was the snippet involving Dr. Mike Levin and Rachel Klein, who have been around since book one.

Brandon's story brings a lot of closure with as far as to what happened to the three boys will they were still young and staying together under the household of a very abusive man. Ash, Luke, and Brandon carry with them their own cache of scars brought about by that time, but their resilience and being able to finally move forward and let go of their pasts was the best part of this book. Of course, that's not to say that Brandon and Tash's love story wasn't good. It actually was, and I must admit that it's probably my favorite among the three. I liked that all the usual suspects--aka the recurring supporting characters--were out in full force here because they will be missed and they played their parts well. There was a full circle moment in the end and this was every bit the happily-ever-after that I was hoping for for the couples. Embrace the Fire gets five stars and the series an average of four stars. ♥

Read my reviews for the Through Hell & Back series:

A Walk Through Fire (book one) - three stars - My Review

After the Fire (book two) - four stars - My Review

Purchase Embrace the Fire on Amazon.