Review: After the Fire by Felice Stevens (Through Hell & Back #2) 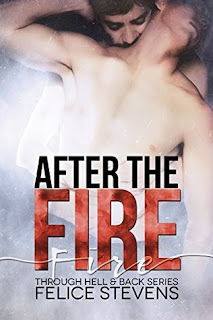 I confess that I was overwhelmed by the amount of angst in the Through Hell & Back series starter, A Walk Through Fire, back in November. When the second re-edited book in the series, After the Fire, was released last month, I hesitated reading it because I worried it would be just as angsty as its predecessor. But with the re-release of the third and final novel in the series, I bit the bullet and read book two...and I'm glad I did. Yes, the angst is still there, but it's at a more acceptable level. This is the story of Dr. Jordan Peterson, whose fiancé, police detective Keith Hart, was shot and killed in the first book, and investment banker Lucas Conover, who also happened to be Keith's financial adviser and is now part of the board of the foundation that Keith had created prior to his sudden passing.

In the nine months since Keith Hart was killed, his fiancé, Jordan Peterson, has barely been able to move forward with his life. He blames his best friend, Drew Klein, for what happened to Keith but is unable to be upfront about his feelings. Jordan is keeping everything swirling within him on lockdown and self-medicating to keep his emotions at bay is the only thing holding him together. Then he receives a letter from Lucas Conover calling into question his dedication to the foundation that was Keith's dream and would be his lasting legacy. The resulting confrontation proves to be far more potent than either one realized. But Luke has never been in any sort of relationship. Can Luke afford to fall in love for the first time ever with a man whose heart belongs to a fallen hero?

Both Jordan and Luke were frustrating at times, but they pushed each other to be better versions of themselves. Moving on is far from easy, and with the way Jordan lost Keith and Luke's feelings of abandonment from his time in foster care, these two men were facing an uphill battle to be together. But, see, that's what made this book so worth the read. Jordan's journey to free himself from addiction was inspiring and his love story with Luke was both sweet and steamy, but it was the series story arc regarding the three foster brothers that had my attention most. Ash had already found Luke's address in book one, but coming together as brothers and seeking redemption was a precarious task for both here. After the Fire was a good read and touched me without going overboard. Four stars. ♥

Read my reviews for the Through Hell & Back series:

A Walk Through Fire (book one) - three stars - My Review

After the Fire (book two) - four stars - My Review (posted above)

Purchase After the Fire on Amazon.