Book Spotlight: A Boy Worth Knowing by Jennifer Cosgrove 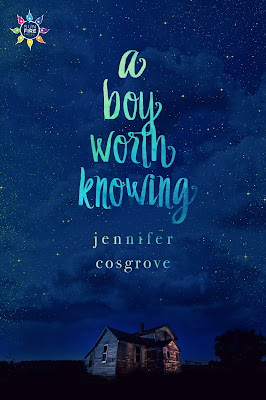 About A Boy Worth Knowing
Ghosts can’t seem to keep their opinions to themselves.

Seventeen-year-old Nate Shaw should know; he’s been talking to them since he was twelve. But they aren’t the only ones making his high school years a living hell. All Nate wants is to keep his secret and keep his head down until he can graduate. That is, until the new boy, James Powell, takes a seat next to him in homeroom. James not only notices him, he manages to work his way into Nate’s life. But James has issues of his own.

Between dead grandmothers and living aunts, Nate has to navigate the fact that he’s falling in love with his only friend, all while getting advice from the most unusual places.

Read my five-plus-starred review of A Boy Worth Knowing.

Add A Boy Worth Knowing on Goodreads.

An Excerpt from A Boy Worth Knowing
I loved autumn mornings.

The October air was just cold enough to set my lungs on fire, my breath visible in clouds of condensation, forcing all of the crap clogging up my head into the recycle bin. Bonus, I could pretend I was a dragon. Nothing could touch me; my morning run made everything go away, lost in miles at a time. Down an isolated country road.

Everything changed when I was twelve, and not for the better. That was when I started running. Five years of road I’d put behind me. My mom worried about me the first time I took off alone. Well, when she used to worry about me. I wished she was more worried about the reason I was running instead of the fact I was doing it down an empty road.

I turned the corner about a mile after leaving home, and that was when I saw him. Samuel was always lurking among the sunken headstones. Most people had no clue there used to be a cemetery out there. Looking closely, some of the stones that made up the foundation of the chapel could still be seen. No one else ever paid that much attention to it. Samuel glared at me as I got closer. He was a surly one.

My life was like the horror movies I loved. I talked to the dead. Well, technically dead. They were really spirits, or whatever. Whatever was left behind when people died. And they talked to me, for some reason. There was nothing like sitting in math class and having a ghost whisper in my ear while trying to take notes.

It happened all the damn time. I didn’t know how to handle it at first. And no one wanted to hang out with the crazy kid in the back of the room, muttering away to himself. I got used to it. Really. And the lack of a social life helped me get all of my homework done on time; all of the teachers loved me. That was good. Talking to ghosts wasn’t all bad.

I waved at Samuel as I ran by the cemetery. He shook a fist at me in return. Samuel wasn’t evil or anything, just grumpy. Couldn’t blame him, though. I looked him up one time and found out he’d died in the late eighteen hundreds. The cause of death on record was a heart attack. But Samuel told me his brother-in-law had poisoned him because he wouldn’t sell him his prize mule. I had no clue what was so special about that mule, but his brother-in-law evidently thought it was worth killing him over. I’d have been pretty surly myself.

Past the forgotten cemetery, a few miles to the McGregor farm, and then I’d swing around for home. Yes, I said McGregor farm. Small-town life— I couldn’t have made this stuff up if I’d tried.

There was another house just past the farm where I had to watch out for their beast of a dog. Dogs weren’t huge fans of mine. My Nana had a theory they could sense a bit of whatever it was that let us chat with those who’d “passed on.” I had no idea how that was even possible, but cats loved me, so yay.

Speaking of which, Aunt Susan’s overly fluffy cat waited by our mailbox. Arthur did that every time I went out for a run. He would sit there and then fall in behind to follow up the driveway until we got to the house. Then, it was a shady spot on the porch in the summer or, if it was cold like that day, into the house in front of the fireplace. I loved predictability.

The house used to be my grandmother’s. It was a standard farmhouse, old and creaky just like dozens more all around us, and it could have stood a little paint. But we called it home, and we liked it. It became Aunt Susan’s home. It had been left to her after Nana died, since my mom already owned one. It was a little out of the way and a long drive to the hospital where my aunt worked. But it was paid for, and that meant a lot.

I had to be quiet going in because Aunt Susan was not a morning person, and the floor squeaked just inside the back door. I was very much a morning person, and I followed the same routine each school or work day. Flipping on the coffee maker, I headed to my room to get ready for school. I got the shower running, since it took a while to heat up in an old farmhouse, and took a sniff to make sure a shower was actually necessary. Oh, yeah. I was gross. 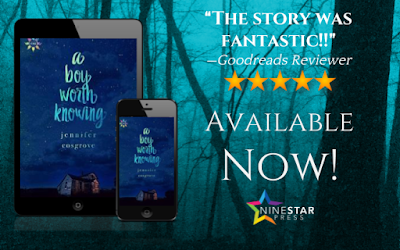 About Jennifer Cosgrove
Jennifer Cosgrove has always been a voracious reader and a well-established geek from an early age. She loves comics, movies, and anything that tells a compelling story.

When not writing, Jennifer likes knitting, dissecting/arguing about movies with her husband, and enjoying the general chaos that comes with having kids.