Review: A Boy Worth Knowing by Jennifer Cosgrove 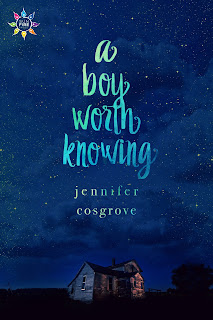 Note: This ARC was provided by SunFire Press via IndiGo Marketing & Design in exchange for an honest review.

I wanted to tell him; I wanted to tell him everything. But the prospect of doing that was so terrifying I couldn't myself to think about it too closely. I wished I had someone to talk to about it, but of course, my current social circle consisted of James (duh, no), my aunt (maybe, probably), my dead grandmother (another possibility), and James's dead brother (a resounding NO).

At seventeen, there are three things that Nathan Shaw knows for certain. He knows he can always count on his aunt to be there for him even if his mother chooses not to be. He knows he can't wait for his senior year to be over and done with so that no longer has to interact with his classmates who make it a point to remind him just how much of a freak he is. And Nate knows he can interact with the dead. Yup. He sees them and talks to them. Just ask his dead grandmother, Nana. Oh, and there's now a fourth certainty Nate can add to that list: he's got a crush on the new boy in school, James Powell, the same boy who becomes his best friend and the very same one whose older brother who died in a car accident is making his presence felt around Nate. Life for Nate is far from boring...

You don't have to be a teenager to appreciate a coming-of-age story, especially one as finely tuned and creatively whimsical as new author Jennifer Cosgrove's debut release, A Boy Worth Knowing, published under the SunFire imprint of NineStar Press. With a paranormal slant to it, Nate Shaw's story is a familiar one. We've all been teenagers and we know all too well why it's called the "awkward" stage for many. Nate is seventeen and gay, a senior in high school who'll face even more unknowns once he graduates, has a crush on his best friend, and sees dead people. He's still trying to find his footing in the world, but once he meets James, it's as if things are beginning to fall into place--maybe not necessarily at his own pace and the pieces may not always land where he wants them to, but that's all part and parcel of growing up, and he, as well as James, do their share of doing that.

I loved the paranormal element in this young adult tale. Nate being able to see and talk to the dead added that touch of whimsy and humor that made the book a lighter read, although Nate's ability is also kinda-sorta-maybe the bane of his existence. He's seen as someone weird, like it wasn't enough that he was different in other ways, there just had to be that bonus aspect to make things even more complicated. But thank goodness for his Aunt Susan, who wasn't just his guardian but was someone who he really had in his corner. And there's no forgetting Nate's Nana and James's brother David. The cast of characters in this story are going to be difficult to forget, nearly as much as the story that they brought to life. Pun intended (assuming you got what the pun was). If A Boy Worth Knowing is the beginning for Jennifer Cosgrove, I can't wait to see how far she'll go. This winner gets five-plus stars. ♥