Review: The Hot One by Lauren Blakely (One Love #2) 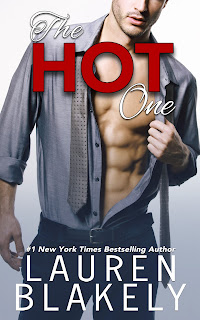 And like that, I surrendered to her, and she gave me the best time ever, even though I'm the asshole who broke her heart.

Now, I hope to hell I'm the man she lets back in.

And make no mistake, I want her heart badly.

How to win it is the big question.

Have I told you lately how much I adore Lauren Blakely's books, particularly the ones in her ongoing Men of Rom Com and One Love series? How the heck can anyone resist these heart-thumpingly fantastic stories, with their irresistibly sexy yet sweet men and determined and darling women? Blakely's latest effort is the second full-length novel and third release in the latter series and is told from the alternative points of view of the main characters, Tyler Nichols and Delaney Stewart. This is a second chance romance and it's every bit as endearing as its predecessors, with that finely balanced concoction of wit, humor, and drama that is quintessential Lauren Blakely.

It's been eight years since Tyler Nichols ended the one relationship that mattered to the only girl he's ever loved. Delaney Stewart may not have become the one that got away had he not let her go in the first place. But seeing her again in the park may be a sign. This could his shot at a second chance--one he probably doesn't deserve after what he did to her, but damn it, he's ready to give it all he's got...even if it means stripping naked for her at her place of employment. Tyler wants the opportunity to apologize, make amends, and prove to Delaney that he isn't the same guy that broke her heart back in college. But it's going to take more than hot sex to convince her of that.

Tyler was originally introduced in Mister O, the second Men of Rom Com book, and was also in the One Love series starter, The Sexy One. When I found out how he chose to end things with Delaney, I was tempted to smack him upside the head. Yeah, he was honest about his inability to handle school and their relationship, but talk about being callous about it. I mean, I get why he felt the need to do it, but points deducted on execution. However, just like he did with Delaney, he won me over. Tyler's a sweetheart and sexy to boot. His interactions with his cousin's daughter, Carly, are ovary-burstingly cute. Tyler treats women in general with respect and Delaney with reverence.

Delaney was a great heroine. She didn't pussyfoot when it came to Tyler. Yes, she was wary about him and his intentions, but once this woman made up her mind about something, she stood by it and went all in. She could have held what he did to her eight years ago over his head for far longer than she did, but she wasn't that kind of person, so definite kudos on that. And the was she dealt with the whole Trevor situation? Goodness, this woman is probably one of the nicest heroines I've come across and she seems to be absolutely sincere about it. There have been times where I feel like I'm being forced to believe a character is honest-to-goodness sweet but isn't actually.

I loved the overall story and once again, Lauren Blakely has made this trope feel fresh, something that can be difficult to do with the plethora of romance novels out there. There were also a number of supporting characters who piqued my curiosity: Clay Nichols, Tyler's cousin who, as it turns out, has his own series, Seductive Nights, whose box set is on my Kobo app; Oliver Edgecombe, the new associate over at Nichols & Nichols and who is either gay or bisexual (or maybe the story he shared with Tyler was a one-time thing); and Nicole, one of Delaney's best friends. Nicole's story is up next and fingers crossed Oliver gets one as well. Five-plus stars go to The Hot One. ♥

Read my reviews for the One Love series:

The Sexy One (book one) - five-plus stars - My Review

The Only One (novella) - five stars - My Review