Review: The Sexy One by Lauren Blakely (One Love #1) 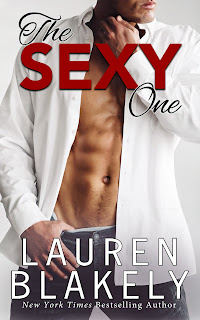 I can't let on how I feel about Simon, because I've spent the last seven months taking care of his adorable five-year-old daughter. And I've spent the last six months, three weeks, and four days keeping the cat of all that attraction tucked in a neat, sealed, airtight bag.

(That's a metaphor, obviously. No cats were harmed in the telling of this tale.)

And for the math wizards of the world, that means it took me three days on the clock to like the guy.

Fine, I'll admit that's hardly any time at all, but he's just that likable.

Zebras and eaglets and French braids and the French language, oh my! If I wasn't already such a Lauren Blakely fangirl, this book would have cinched it for me. I've loved the first three novels in her Men of Rom Com series, but there's just something extraordinarily squee-worthy about The Sexy One that got to me. Now, I'm not entirely sure if this is still part of that series, because I've been doing a bit of hypothesizing in my cluttered head and because of the change in title color on the cover (yes, I notice stuff like that) from the yellow-orange hue of those books to a red one makes me think this is a spin-off. There was also me noticing that one the author's upcoming books is a novella with a supporting character from this new release and it's labeled as a One Love novella, so... I know, I know. I'm making assumptions, but I can't help myself. I'm totally obsessed with these books, and I don't care if they're two separate series that are connected. I just like having stuff organized because I'm weird that way. Now, let's get on with this review!

Twenty-six-year-old Abby Becker is the envy of nannies everywhere--well, okay, possibly in the state of New York--because she works for none other than Simon Travers, aka the Sexy One. He's hot, intelligent, generous, wealthy, and an amazing father to his little girl, Hayden. Did I mention how hot he was? Abby's had a crush on him for nearly as long as she's been working for him. Okay, scratch that. If she's totally honest with herself, she's been crushing on him for the whole seven months she's been under his employ and wishing she were actually underneath him instead. Cough, cough. But she's earning enough that she'll her college debt will soon be a thing of the past and she adores Hayden, so it's not as if she can risk her job. And it's all one-sided anyway...that is, until he brings her cake...and watches the little eagle family Hayden is obsessed with. When she offers to tutor him in French to help with a business deal, they spend more one-on-one time together. But is this really nothing more than a crush or could their feelings run deeper?

An employer shouldn't be noticing things like the color of his employee's hair and wondering if it's as soft as it looks. At least that's what Simon Travers has been reminding himself ever since his daughter's nanny came into the picture. If there was such a thing as the perfect nanny, she would be it. Hayden loves Abby, and Simon doesn't doubt that the feeling is very much mutual. But Simon likes Abby too, and not in the way someone who pays her paycheck should be feeling. The more he's around her, the more he can't seem to stop himself from wanting to get closer, but physically and otherwise. But why would she be interested in a man eight years older than her and someone who's a single father? Only, she is interested! Is he willing to cross that line with Abby? What if he messes up and ends up costing his daughter the world's greatest nanny? Even worse, what if he messes up and he ends up never having Abby in his life? Making the right investments has led him to success. Will investing in his feelings lead Simon to the woman he's falling for?

Confession time: This is the first book wherein I actually stood up and jumped up and down while squeeing like an idiot. Take note, those of you who have yet to read this book (seriously, what is wrong with you people?): Watch out for the last few paragraphs of Chapter 20. Yeah. Absolute swoon. But this entire novel was a swoon-fest! It may also manage to surprise you because just when you think it'll go the way of similar stories in the past, it doesn't, setting itself apart in the best way possible. The humor here is also a bit (just a smidge) subtler than in the Men of Rom Com books, meaning it isn't the laugh out loud hilarity you may be expecting, but the warmth and wittiness are present, which resulted in giggles and smiles from moi. Simon and Abby are my favorite fictional couple of 2016, and whether they were French braiding, studying French, or French kissing, they won my heart with an honest-to-goodness romance with heart and heat. Oh, and zebras. Can't forget the zebras. Five-plus stars (a hundredfold) for The Sexy One. ♥

Purchase The Sexy One on Amazon | B&N | Kobo.