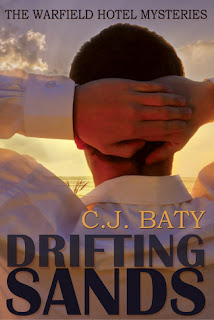 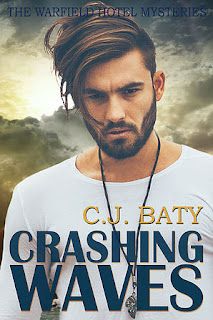 Note: This ebook and ARC were provided by Signal Boost Promotions in exchange for an honest review.

Drifting Sands and Crashing Waves are the first and second books, respectively, in the romantic mystery suspense series from author C.J. Baty entitled Warfield Hotel Mysteries. Instead of going with two separate reviews, I'm going ahead and consolidating my thoughts in one review because these two books are directly connected to one another, with the second being the sequel to the first, with the same core set of characters. I'm not sure if there will be more releases in the series, but there were supporting characters that felt like they had promising potential.

Drifting Sands introduces readers to Justin Warfield, owner of the Warfield Hotel and a man very much in the closet hoping to finally be divorced from the wife he was forced to marry. Men are murdered one after the other, each sharing two things in particular: they're each shot in the heart and in the genitals, and they're all connected to Justin. The timely arrival of Justin's younger brother Peter and Peter's best friend, private investigator Marcus Drummond has Justin contemplating getting to know Marcus better...if only those dead bodies would allow him to.

Crashing Waves continues the story of Justin, Marcus, and everything that was left hanging in book one finally gets tied together. Justin's return from a much needed separation from the events that occurred the summer before results in threats made and things escalating, with the actual hotel looking more and more like the primary target. Peter decides to bring in Marcus, hoping his best friend's investigative skills will bring them answers. Can Marcus risk getting rejected by Justin again or will they be too busy risking their lives figuring out who the mastermind is?

For both books, guessing who the bad guys were wasn't too difficult since there weren't really too many people to add to any suspect list. I really liked Marcus and felt for the guy when Justin was waffling. As far as the mystery aspect of the books, it was fairly good, allowing for a degree of suspense while building anticipation as to what the main characters were going to have to face next. In terms of the romance, there was more back and forth than I would have personally wanted, but Drifting Sands and Crashing Waves were pretty good 3.5-starred overall reads. ♥