Review: To Love and to Cherish by Lauren Layne (Wedding Belles #3) 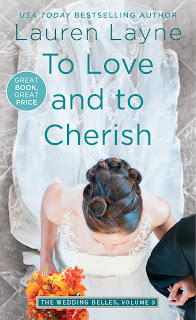 Say it isn't so!!! This can't be the end to the Wedding Belles series! No! I cannot accept it...except...I have no choice but to do so. Yes, fans and readers alike, bestselling author Lauren Layne wraps up her Wedding Belles series with what I consider the most awaited story--that of Logan Harris and Alexis Morgan. Yup! We finally get the love story of the British bespectacled hottie slash accountant Logan and wedding organizer slash coordinator slash head Belle Alexis. These two have always had a curious kind of chemistry going on, understated yet it's clearly there. Logan's feelings for Alexis are obvious, Alexis's for Logan a tad more...unrecognized...by Alexis herself. So, do these two get their happily-ever-after? You'll have to read it (am I fooling anyone out there?) because even if their ending is predictable, their story definitely isn't...

When Alexis Morgan and Logan Harris first meet, they're both twenty-five and know what it is they want to do in the next phase of their lives post-graduate school. The bar they're at may not be conducive to a business deal, but when Logan offers her the deal of a lifetime, Alexis is both hopeful and wary. Why would the hot Brit want to invest in her business idea? But after a week of waffling, the deal is sealed and it's the beginning of an eight-year friendship, one that both cherish. However, Logan has always wanted more from Alexis, if only she would pay a bit more attention and recognize that his feelings for her are more than platonic. Even if Alexis has a plan for her personal life, she's never really pictured Logan as part of it other than as a friend. Will it take losing him for Akexis to realize what's been in front of her all along?

Oh, Logan... Goodness, this man just checked all my boxes. From the whole Clark Kent thing with the glasses to the accent to the quiet persona hiding a more assertive nature, Logan was IT for me. He was also it for Alexis if only she would lift her head up from all the Wedding Belles stuff swirling around her to see it. Gah, this woman was super frustrating at times, and my heart hurt for Logan because hello, eight years is a long time and she really did seem like this clueless wonder since everyone around them knew what was going on and she didn't or she simply refused to acknowledge it. But I so, so, SO adored their story and how the tables were turned at a certain point. The truest kind of love is the one that changes your life if only you let it, which is what the Wedding Belles series is about. Five stars go to To Love and to Cherish. ♥

Read my reviews for the Wedding Belles series:

From This Day Forward (prequel novella) - four stars - My Review

For Better or Words (book two) - five-plus stars - My Review

Purchase To Love and to Cherish on Amazon | B&N | Kobo.