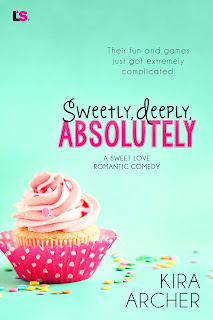 Jennifer Boyd is using her month-long break from culinary school in Paris to gain much-needed experience at the mobile bakery truck to help out her very pregnant sister-in-law. She intends to do her fair share of partying during her free time, and when she meets a hot, bearded guy at a club, she's immediately attracted to the stranger. Only he isn't really much of a stranger, but while Jenny doesn't recognize him, Jared Crew recognizes her. He knows he should keep his distance from the younger sister of the husband of one of his best friends, but then they're paired up to help with the bakery. Neither one of them has been known for monogamy nor commitment and they have no plans of changing their relationship. All they want is to have fun and enjoy each other's company for as long as they're interested in the amount of time Jenny's around. But a broken condom is about to mess with their plans...

Sweetly, Deeply, Absolutely is the third book in the Sweet Love romantic comedy series from author Kira Archer and it closes out the trilogy well with a sweet romance between two commitment-phobes who do a bit of growing up in the few weeks they're together. Both Jenny and Jared are likable main characters who prefer to keep things light and easy, but that, of course, changes when the condom they're using breaks, though it doesn't become overly angsty or dramatic. Jared is actually a good guy who just doesn't take responsibility and adulting seriously, postponing for as long as he can, but his love for his friends is clear from the beginning. The date to the zoo was super sweet and that was what made it obvious that Jenny was different from the other girls Jared had been with before. The ending was one that I felt was just right for their story. I'm giving Sweetly, Deeply, Absolutely four stars. ♥