Review: The Reason for Me by Prescott Lane 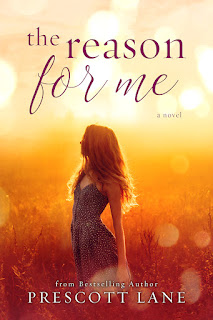 The Dirty Truth Blog
November 18
Your heart has a memory

Your heart has a memory, and it's stronger and longer lasting than your brain will ever be. Have you ever noticed how you can have trouble remembering certain things, details? But can always remember how you felt at a certain moment, in a certain situation. When your mind is fuzzy, you heart stays clear. It remembers.

You may not remember the specifics about a person, but you'll always remember how that person made you feel. It's like emotions are burned into your heart, even if the details aren't. Works for people, places, and events. It doesn't matter. If it sparked an emotion in you, it burned itself onto your heart and won't ever leave.

How it is possible that I've never read anything by Prescott Lane before?! I read more than my fair share of books--take a peek at my review schedule and you'll see what mean--and it boggles my mind how I could have completely missed out on reading something this clearly gifted author has written in the past. It took one book--one!--to make me realize that I was missing out on some fantastic storytelling, because trust me when I tell you, Prescott Lane knows what she's doing, and she does it remarkably well. What novel is this, you may ask? It's The Reason for Me.

Halloween may be a day where treats are handed out freely, but it was on this day five years ago that the ultimate trick was played on Annalyse Reynolds, one that broke her in every way possible. But she isn't the only one that was tricked on that same day in that same year. When she meets her older sister's neighbor while she's house-sitting, it's clear that Holt Miller is also broken. They're drawn to each other--maybe by their brokenness, maybe by something currently undefinable--but are these two beyond repair or will being together break them even further?

From Annalyse's blog posts on The Dirty Truth--with Holt's blog entry being one of my favorites--to Holt's small talk--with Annalyse preferring to get right to the sometimes harsh point, this novel was such a heart-opening, soul-scorching read. Readers learn early on when Annalyse is as broken as she's been over the past five years, but Holt's reasons are tightly kept secret in his dresser drawer. Once you see why he is the way he's been the last few years, it's difficult not to feel for him; it's already difficult enough not to empathize with Annalyse and her profound loss.

There is such depth and breadth to the heartache these two continue to experience, but while Annalyse tries to endure and move beyond it, Holt has wallowed. Yes, he takes small steps forward because of Annalyse, but he also takes strides backward or he's frozen where he is at times. Loss does break you. If there isn't any part of you that's broken, then you haven't really lost anything worthwhile. But The Reason for Me is about choosing to embrace emotions and dreams again, those of love, hope, and happiness, and it's a story so worth reading. Five-plus stars. ♥

Purchase The Reason for Me on Amazon.