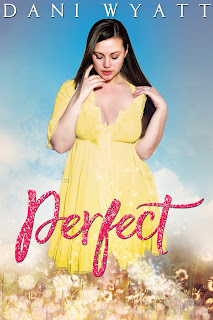 Perfect is a standalone book and my first read from author Dani Wyatt. It's a new adult (NA) romance about eighteen-year-old Talia Fielding, who has spent all her life sheltered from the rest of the world by her father, only recently coming out of years of homeschooling and not being able to socialize with her peers. Talia meets twenty-four-year-old Griffin Stanford, a varsity football star and the guy that the girls want to get with. Unfortunately for all those girls, Griffin has never shown any interest in them...that is, until he sees Talia for the very first time. She's gorgeous, with her silky black hair and generous curves. There's an innocence interspersed with her inquisitiveness, plus she comes off as someone genuine and without any hidden motives to get close to him. One kiss and his email address are all they're able to share before she disappears and he flies off to Germany for work. Griffin composes emails to the girl that's captured his heart, but never gets around to sending them, having no clue what Talia's email address is. Just when Griffin loses all hope, an email lands in his inbox three long months later...

I wouldn't necessarily classify this as an insta-love story. I think that both the main characters, Talia and Griffin, were smitten with each other, and it wasn't until they began exchanging emails that more of that romantic kind of love seeped into their long-distance kinda-sorta-maybe relationship. I liked that Talia wasn't some stick-thin girl, so definite kudos to the author. There's also an evolution of sorts that she goes through in the book: from naive and clueless to more womanly, independent, and daring, and not necessarily because of being in contact with Griffin either. She made the conscious choice to strike out on her own and experience things that she was kept from for too long. On the other hand, Griffin started the story off as sweet and sensitive, but boy, oh boy, he transformed into this super horny guy, and one heck of a possessive one once he and Talia were face to face again. I do like that he was supportive of Talia and that he made sure to tell her how beautiful she was in his eyes. This may have been my first Dani Wyatt read, but I'd happily read her other books if the synopsis catch my fancy. Perfect gets 4.5 stars. ♥