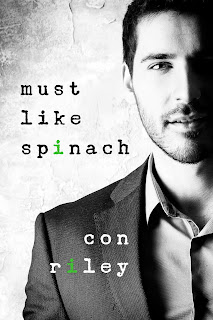 For you to like Must Like Spinach, you must like well-written prose, thoughtful characters, and a heartwarming story. Con Riley is a new author to me but after having finished this novel, I certainly wouldn't say "no" to reading more. This was the story of Jonathan Fournier, a management consultant who is brought to task for a blow-up that could have ended his career but is instead given a new client. Temporarily moving to Seattle works for Jon, since it'll have him far enough from New York to focus on work instead of thinking about what got him into trouble in the first place. Looking for a place to rent has his eyes snagging on one particular ad and it's the "must like spinach" requirement that has him intrigued. Or it could be the slightly blurry yet still nice looking guy in the photo accompanying the idea, one that showcased the huge garden. The house is a mess and the garden turns out to be overgrown, but there's something about it combined with the elderly landlady that has him agreeing to become the latest tenant. He'll only be there for three months anyway, but three months could be long enough for Jon to start thinking about what it is he wants in his life but not long enough for him to be with the guy he's falling for.

This book surprised the heck out of me. It was so much more than what I was expecting it to be and when that happens, it's always a good thing. I liked the story because it was about Jon's literal and figurative journey, and how the move from New York to Seattle, which was supposed to be temporary, ended up being one that changed his life. It's about the legacies left behind by those we love most and the legacies that we create for ourselves. Jon has a basic plan for himself and it mostly involves climbing the corporate ladder and becoming successful. However, each individual measures success differently, and financial security is only one component. In Seattle, Jon makes discoveries about himself and about the people he works with and Tyler, the man he pegs as lazy and taking advantage of their landlady. Early on, Jon makes assumptions about people, as the story progresses, he sees the importance of truly getting to know them in order to fully appreciate who they are. The very best thing about this book was its cast of characters, and I loved getting to know each of them. Through each one of them, Jon as the main character and the reader as an observer, learn and re-learn inspiring life lessons. Must Like Spinach was a five-starred read. ♥