Review: Mistletoe Between Friends / The Snowflake Inn by Samantha Chase 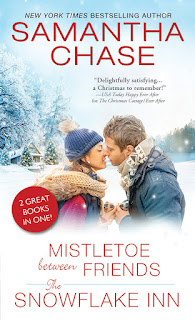 Note: This ARC was provided by Sourcebooks Casablanca in exchange for an honest review.

Mistletoe Between Friends and The Snowflake Inn, the holiday stories written by bestselling author Samantha Chase, have been put together in one easy to purchase package, and with Christmas less than two months away, this is a good time for you to stock up on some Christmasy romances. I've always enjoyed my Samantha Chase reads, and because these two stories are totally unrelated and not connected to one another, you can read either one separately and at your leisure.

MIstletoe Between Friends is a friends-to-lovers story about Cameron Greene and Lily Cavanaugh, both of whom have been friends since they were kids and whose respective families are close to one another. With their mothers constantly trying to set them up on what turn out to be the worst blind dates possible, Cam convinces his best friend to pretend to be in a relationship with him in order to get their mothers to quit with the matchmaking. Lily thinks it's a great idea, but what happens when they both wish it were real, except neither one thinks the other feels the same way?

The Snowflake Inn is an enemies-to-lovers romance between recently discharged Marine Riley Walsh and Grace Brodie, who meets Riley's mother while both are in rehab--Riley's mother after her hip replacement surgery and Grace after she breaks her leg in four places after a skiing accident--and helps her out at the Snowflake Inn, the family-owned bed and breakfast. Riley has never wanted to take over the inn and would prefer his mother sell it so she can enjoy her retirement instead of overworking herself. Will he change his mind once he sees how much the Snowflake Inn truly means to his mother and how much it's begun to mean to the woman he's falling for?

Both stories were light in tone, which I think is apt for holiday themed romances like these two. I liked the chemistry between each of the individuals in both pairs. I do think, that Cam and Lily needed to communicate better, especially because they were best friends and it seemed that their communication skills went down the drain the minute all the romantic feelings came to the surface. Riley and Grace had great tension between them, and I liked the angle in both books that had to do with family, because Christmas, after all, is about family. I read both stories one after the other and enjoyed each one. I'm giving the Mistletoe Between Friends / The Snowflake Inn two-in-one collection four stars. ♥