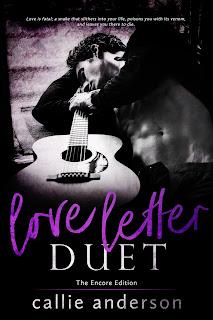 Emilia Darcy wants nothing to do with love. She's seen the good that it's done for people but she's also seen the ramifications once the love is gone or the source of the love is no longer around. Her mother and father were very much in love. And then cancer took her mother, and a year later, her father, too, was gone. But when she meets Weston Carter, it was as if destiny didn't really care that she had no intention of ever falling in love, especially a musician like Weston. Try as she might, there was no escaping the feelings he inspired in her...until Emilia decided to take both their fates in her hands and made a choice that would change the trajectory of their lives for the next four years. But destiny doesn't appreciate being messed with, and this time around, too many lies and secrets are bound to unravel, and when they do, Weston and Emilia will either be left stronger than they once were, ready to face whatever challenges together, or left with no other choice but to walk away from the only person that they ever loved to try with someone new.

Callie Anderson's Invisible Love Letter and Endless Love Letter are two of the more talked about titles I've come across in the past year, and now the author has released the duet as part of what's called the "encore edition". I never had the opportunity to read either book when they were originally released, so I can't compare the individual novels to this new edition which contains additional content. I will say, however, that I'm disappointed...with myself. I can't believe it took me this long to read Emilia Darcy and Weston Carter's love story, which had me running through a gamut of emotions, from frustrated to the point of wanting to stick my hand in my e-reader and smacking Emilia to anticipation as to what fate had in store for the erstwhile lovers and then you've got all the rest in between. This book also made me think and I paused more than once, wondering what I would do if I were in either Emilia's or Weston's position. A heartrending story and characters like those in Love Letter Duet: The Encore Edition deserve five stars. ♥