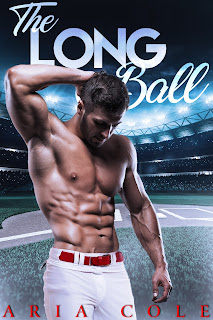 The Long Ball is the latest--and longest--release from author Aria Cole, and I'd have to say, this is the author at her best so far. This is her second sports romance and it's set in the world of professional baseball, with me appreciating the timing since the World Series--the championship series held in October, for you non-baseball fans out there--just started. There isn't any insta-love going on here and the male main character has no choice but to work for the female main character's attention, and of course, her love, respect, and trust as the story goes on.

At thirty and after more than a decade, Cash Greenwood is one of the foremost pitchers AND sluggers in the sport of baseball. His world has always revolved around baseball, leaving him little time for a personal life, not that there's been any woman that's caught his interest. And then he meets the feisty female who uses analytics to point out what works and doesn't work. But Delilah Grey isn't interested in baseball players, especially someone like Cash, who may not be the playboy she has him pegged for, but could very well shatter her heart unlike any other.

I liked the sexual tension that was simmering between Cash and Delilah from the get-go, and compared to the author's past work, this was more of a slow burn romance. Delilah clearly has her reasons for not wanting to be with a baseball player, and kudos to Cash for not being physically aggressive in his pursuit of her. He was sweet and persistent, but he always respected her boundaries, nudging, prodding, but never doing it to the point of discomfort. She's falls for him, but her distrust of baseball players is deeply rooted in what she observed as a child.

Cash was such a great guy. He seemed like the poster boy of one version of Mr. Perfect: athletic, successful, passionate, and loyal. I did have one moment where my eyebrow couldn't help but shoot up: Cash being a thirty-year-old virgin. But hey, no one said such a thing were an absolute impossibility, so it was just a matter of suspending disbelief in my case. All in all, it was difficult for me not to fall for Cash and Delilah and their story, and this didn't have just one or two epilogues, but five, so The Long Ball gives us lots of happily-ever-afters. 4.5 stars. ♥

Purchase The Long Ball on Amazon.