Review: Into the Tomorrows & Back to Yesterday by Whitney Barbetti (Bleeding Hearts #1-#2) 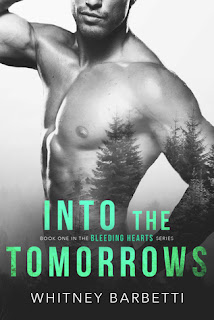 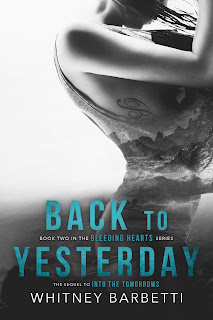 Note: This ebook was provided by Southern Belle Promotions in exchange for an honest review.

Into the Tomorrows and Back to Yesterday are the first two novels in the Bleeding Hearts series written by author Whitney Barbetti, whose previous work I've enjoyed thoroughly in the past, so my expectations going into this new series were high. I usually write separate reviews for each book in a series. If memory serves me right, I've only written one joint review for one trilogy, but these two Whitney Barbetti books fall under the same consideration I gave that trilogy: the second book is the direct sequel to the first, meaning you can't read one without the other (and yes, book one ends in an evil cliffhanger, BUT book two is already available so purchase them together. There's a third book planned, but it's about a different couple, so that further cemented my decision to combine these interconnected novels in a singular review.

Ingrained in her by her mother was the thought that her name meant sadness and that she should expect her life to be filled with exactly that. When Trista Kohl experiences the devastating loss of her closest and dearest friend, she feels lost. Three years after, she makes the decision to head to Colorado to be with her boyfriend of six years, Colin Marks. Their relationship may not be filled with the same amount of love and passion it once did, but they continue to stay together. Then Trista meets Colin's roommate, Jude Sommers, and something within her comes to life. Love blossoms, but secrets from all sides come out and threaten Trista's waning relationship with the man she once loved and the relationship she hopes to have with the man she loves now. Will Trista lose her chance at happiness or is she destined again for sorrow?

Trista's entire life has been about who she is when she's with someone else. She was someone's best friend, someone's girlfriend, someone's daughter, someone's granddaughter. She belonged to other people but she never truly belonged to herself. It was as if her existence was defined by whomever she was with, and for her to be able to have a life and to claim the happiness she deserves, she had to find the real Trista, the one stripped of all the labels. There was always someone there to catch her if she fell, but she had to learn how to stand on her own, and that's what makes these two novels such intense reads. They lay out the journey Trista takes, and it's a journey that stops and starts, takes wrong or longer routes, and for a while, it was as if there was no known destination. Through it all, you become immersed in Trista's story.

Without a doubt, Whitney Barbetti has a gift for putting emotion behind the written words she composes. She's created such a beautifully told love story, and it's a two-fold one. It's the story of how Trista and Jude fall in love and it's also the story of how Trista learns to love who she is. She's lost for a good portion of both books and there are moments you wonder if she's holding on to the wrong map of her life. When she finds what and who she's looking for, I cheered for her. No one wants to have a life that's filled with misery because then that isn't much of a life to live. Jude was such an amazing male main character and his devotion to Trista was awe-inspiring. My favorite thing about the two books was the poetry because they were glimpses into Trista's truest feelings and unfiltered thoughts. I'm giving both these books five stars. ♥

Purchase Into the Tomorrows on Amazon.

Purchase Back to Yesterday on Amazon.