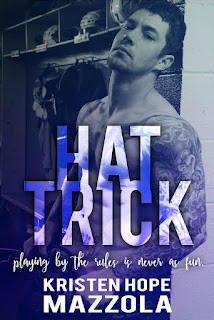 Hat Trick is a new adult (NA) sports romance standalone written by Kristen Hope Mazzola and it has three central characters: Brayden Cox, his younger sister Myla, and Gavin Hayes. Brayden and Gavin belong to the same hockey team, the New York Otters, and Myla is a former figure skater who was on her way to making it to the Winter Olympics before a car accident left her badly injured and both her and Brayden motherless. All three of them half father issues, with Brayden and Myla's father being abusive and later landing in prison due to causing an accident while intoxicated, and Gavin's father never seeing him as good enough. Both fathers were former members of the Otters, with Gavin's father now the coach of the team and his son the new captain. Gavin and Brayden don't particularly like each other but when Gavin and Myla decide to start seeing each other, how long will these two be able to keep their secret from Brayden?

I've read my fair share of hockey romances, and on average, I've enjoyed most of the ones I've read, a select few I consider all-time favorites. Unfortunately, I cannot count Hat Trick as one of those. I read the synopsis and was expecting a read that had some angst, but nope. I just didn't feel much of anything while reading, and that basically means I wasn't emotionally invested in any of the characters. The story is told from three varying points of view, but I barely got to know Brayden, Gavin, or Myla. It was as if I was barely skimming the surface with as far as who these three really were, what motivated them, what made them tick, etc. Then the transitions from one chapter to another felt clinical, almost as if it were a matter of one event per chapter, and I was be told a story rather than experiencing it all with the main characters.

This could have been so much more than it actually was, but there was nothing much resolved, or if they were resolved, it was never explained how they got to that point. These three had issues with their parents, there was the death of one parent, Myla's recovery from her injuries, and then the connection between Sean--Brayden's best friend--to the accident, but they none of these were explored, so they were all missed opportunities, in my humble opinion. I wish I could give Hat Trick a higher rating, because I have enjoyed the two stories the author wrote in the past, but I simply can't, so this only garners two stars. ♥