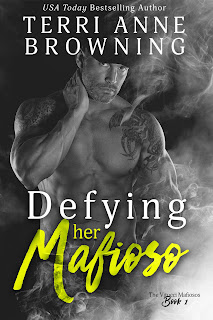 Defying Her Mafioso is the first book in bestselling author Terri Anne Browning's new series entitled Vitucci Mafiosos. As you can tell from the title of both the book and the series, this is a mob romance and it spotlights the Vitucci family who head the Cosa Nostra in the East Coast. Book one is about Scarlett Vitucci, one of the twin daughters of mob boss Vito Vitucci, and Ciro Donati, a capo in the mob and son of Vito's best friend and consigliere. They were the closest of friends, but when Scarlett wanted more, Ciro thought it best for her to leave.

Three years ago, Ciro pushed Vito to send Scarlett and her sister Victoria to Italy, hoping the distance will make Scarlett's feelings for him--feelings he more than wanted to reciprocate--dissipate. Now she's back in New York, and at twenty-one, she's still the only woman that affects Ciro, mind, heart, body, and soul. He's never thought himself good enough for her, but even though he knows he should stay away from and not pursue her, it becomes increasingly difficult to deny both their hearts what they want and need, especially with her now within his reach.

At twenty-six, Ciro's hands have been stained by the blood of others too many times, and he refuses to let that affect Scarlett. He sees himself a monster unworthy of Scarlett, believing she would be better of with a man who can give her a quiet and respectable life. Yet, Ciro cannot bring himself to imagine her with anyone else. When Scarlett is abducted and her life put in danger, Ciro is desperate to find her. Will he be too late to rescue the woman he loves and will he make amends for those three years of separation and prove that the belong together?

This was an enjoyable beginning to a somewhat intriguing series. While Ciro and Scarlett get their their happily-ever-after, there are some loose ends in terms of other potential couples that were introduced as well as with those threatening to bring harm to the Vitucci organization. There are some inconsistencies in the story but nothing major in terms of affecting the main story line. Ciro and Scarlett were highly likable and I look forward to reading the stories of the other Vitucci siblings and their allies. I'm giving Defying Her Mafioso four out of five stars. ♥