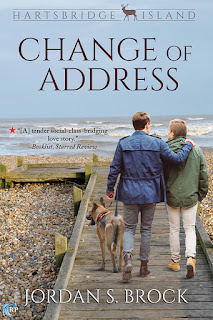 Change of Address is the novel that introduces readers to Hartsbridge Island, a new series from author Jordan S. Brock and the setting for the series. Book one is about Air Force veteran Michael Baldwin, who at twenty-eight and after a couple of years of physical therapy has decided to move to Hartsbridge Island, where his politically-aligned family maintains a summer home. Michael has his German shepherd service dog, Kaylee, to help him with his post-traumatic stress disorder, but he still shies away from being around people but tries to engage whenever necessary. On his first day on the island, he enters Bagel End and meets Josh Goldberg, whose friendly and open nature and appreciation for Kaylee--and undeniable cuteness--have Michael taking notice. But can he even consider trying to ask Josh out when Michael's got his PTSD and overbearing governor slash father to deal with?

He's a high school dropout who still lives with his father and has difficult reading and writing as well as has insecurities with his weight, so when the hot new tourist, who turns out to be a new transplant to Hartsbridge Island, lingers a little longer and shows up at the family-owned shop more than once, Josh Goldberg is both surprised and thrilled. Michael Baldwin is good-looking and seems like a nice guy, one who has a service dog that Josh can't help but want to pet. But soon enough, it becomes clear that Michael's dealing with what looks like PTSD, and Josh wonders if this is something that he can actually take on. But he's finding it difficult to stay away from the man whose sincerity and eagerness to be with him makes Josh want to get to know him even more. But what can someone like him offer to a man like Michael and can they overcome pressure from Michael's father?

A book that has a dog as an actual vital and active character in the story rather than being a decorative prop gets bonus points from me and Kaylee was effective in highlighting what Michael was experiencing as a war veteran. The difficulties of someone with PTSD are to be expected, but the benefits of having a service dog as well as the lighter moments that didn't involve Kaylee at work were highlighted, so we get a more well-rounded picture of how vital Kaylee was to Michael as a former soldier specifically and just as a human being in general. There were several stops and starts when it came to the actual romance part of Michael and Josh's story, but I think that this was actually for the best, since it made for a stronger foundation for their relationship once all the potential complications were brought to light between them. Change of Address was a highly enjoyable, 4.5-starred read. ♥