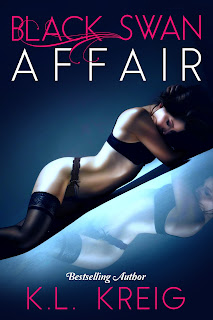 My soul has been searched until it's raw.

I have my answers.

Now I have to do something with them.

Today is going to be the hardest of my life and the happiest one.

I have to tell one man good-bye, crushing him, while I make the other the happiest man on earth when he finds out he's my forever.

It's true that with every breath I've taken over the past twenty-six years I've tasted Killian Shephard. But with every heartbeat of mine, I've felt Kael's drumming in synch.

Gobsmacked. I am utterly, totally, absolutely gobsmacked. I wish I could put into sufficient enough words how outstanding this novel is and how astounded I am that I had never come across K.L. Kreig's writing prior to reading the standalone standout that is Black Swan Affair. Fair warning: This review is going to be short. I often put together a synopsis within a paragraph or two to give whoever's reading what the book I'm reviewing is about, but I refuse to go into too much detail, because then it really and truly will spoil the entire experience for you. That was the thing with this novel--you have to experience everything as it unfolds. My tendency to hypothesize about what's going on and what may happen next was suspiciously on hiatus...or maybe not so suspicious since this story was demanded my focus and attention.

So, allow me to go through the basics so that you have an idea what you're headed into and who's involved. At the center of this story is one young woman named Maverick DeSoto and the worlds of two men revolve solely on her--brothers Killian and Kael Shepherd. Killian is the boy Maverick has always loved, the one who has owned her--body and soul and heart and mind. Then he betrays her in the worst way possible: he marries her sister. So, Maverick does the one thing that will break him back: she marries her best friend, who just happens to be Killian's younger brother. Two marriages, four hearts. Two pairs of vows exchanged, two couples tied together for the rest of their lifetimes. Four individuals in love: two are in love with their spouses...which is as it should be in marriage. Except their spouses aren't in love with them.

The story is told from two perspectives, but I won't say whose, and it takes place in the present while giving readers a more substantial idea the depth of the feelings involved through flashbacks. Choices were and will have to be made by all the characters in the story, and those choices have consequences.I'm going to give in and point out that it's Maverick who has to make the ultimate choice between Killian and Kael, but you may have already picked that up with the snippet I highlighted at the beginning of the review. Do I agree with her choice? Yes, but my heart broke for the one who wasn't chosen, and because I believe the good ones--and Maverick, Killian, and Kael are good ones--deserve happily-ever-afters, I hope he gets his own shot at lasting happiness in a future novel. Wishful thinking? Maybe, but I've got my fingers crossed. My rating scale only goes up to five-plus stars but if I could give Black Swan Affair quintuple that, I would. ♥