Review: Between Here and the Horizon by Callie Hart 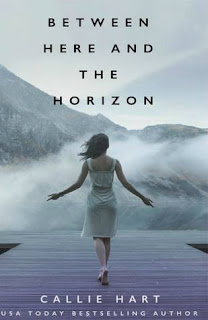 Callie Hart is a new author to me, though I have come across her past titles on Goodreads and I've been curious to check out her writing. Between Here and the Horizon was a story that surprised me with the twists and turns it had laying in wait. It certainly didn't play out in the way I had thought it was going to, and I always give props to an author who's able to surprise--in the best way possible, of course.

This year has introduced me to new readers and as of late, I've read books that have these major twists to them that leave me needing to keep my reviews as vague as humanly possible--well, as much as possible for someone like me. Not everyone likes spoilers, but I always try to give a detailed enough synopsis so that readers have a good enough idea about what they're getting into. In the case of Between Here and the Horizon, I'm going to keep to try and keep it concise.

Ophelia Lang is desperate enough for a new job that she accepts having to move cross-country in order to have money coming in. She needs it to help out her family, but she's not sure what to make of her new employer, Ronan Fletcher, who has her both wary and curious. She tries to focus on his two children, but the more he's around her, the more something tethers her to him. But lies and secrets abound, and when Ophelia is caught in the middle, she'll have to figure out a way not just to save herself, but to save the family she's begun to consider her own...

Vague enough to keep it spoiler-free, but interesting enough to make you want to read it? I hope so, because it was quite a good read. Callie Hart's writing makes it clear why she has the following that she does and why she's a bestselling author. Ophelia and Ronan's story is enthralling and gets its hooks in your from the get-go and you're left with little choice but to see it through till the climactic end. Between Here and the Horizon gets 4.5 stars. ♥

Purchase Between Here and the Horizon on Amazon | B&N | Kobo.