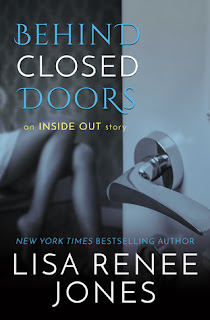 Behind Closed Doors is a standalone story in the bestselling Inside Out and Careless Whispers series from Lisa Renee Jones, but a quick look on Goodreads has it listed as the first novel in a series by the same title. This is also my second read from the author--the first being Hard Rules, book one in the Lisa Renee Jones's Dirty Money series--and I'm beginning to feel as if I've been missing out on a whole lot of fabulous reading the past four or so years. Though Behind Closed Doors includes a main character from a different series, I never felt like I was missing any sort of additional information, so my never having read Ella Ferguson's story in the two novels currently available in the Careless Whispers series--which I will be remedying because I have those books plus the advanced reader copy to the third book on-hand--wasn't a detriment. If anything, the inclusion of Ella has made me doubly curious about her series, and because it seems they all tie together with the Inside Out books, those are on my way too long to-be-read list as well.

Skye Montgomery isn't too sure biding on a storage locker and finding something worth a mint will solve her money woes and get her into law school any faster, but her new friend is persistent. She buys the last locker up for auction and there's nothing much of value except for a key to a locker in a bus station that's piqued her curiosity. What she finds is a poker chip and a note to someone named Jason. When she finds a man at her front door who just happens to be poker champion Jason Wise, it becomes clear that there's much more going on than she once believed. Jason's being blackmailed and he immediately suspects Skye's in cahoots with the woman blackmailing him--the same woman who happens to be the owner of the storage locker Skye won. Now, Skye needs to decide if she's willing to help Jason by handing over the contents of the locker, but first, he asks her to accompany him to Vegas for a poker tournament. When more threats are made, Jason and Skye will have to go all in and gamble on who they can and cannot trust.

This was a scintillating read, with a good balance of intrigue and romance, neither one usurping the other. It becomes clear early on that there's more to the whole blackmailing plot than meets the eye, and alongside Skye and Jason, I wanted to know who was pulling the strings and for what reason, because figuring one out will make the other one easier to realize. Surprisingly, the story does not take place over what I believed was going to be a limited period of time, and while I don't have a problem with insta-love, I do have a thing for slow burn romances--which doesn't immediately equate to waiting before hooking up. Everything about this book felt as if it were going along in a timely fashion, never rushing nor trudging along, and the reader's given an ample amount of time to get to know the main characters and then want to get to know the more marked supporting characters, which is a good thing if this truly is a series starter. Behind Closed Doors works perfectly as a standalone, has no cliffhangers to speak of, and gets five stars. ♥