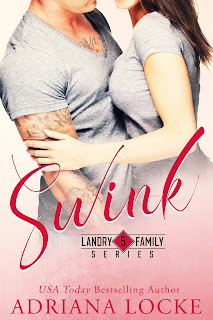 “I thought you hated my brothers.”

“It doesn’t matter what I think about them. You need them. You can’t let some asshole like me get in between you.”

“I need them?” she asks, her brows lifted. “You know what I need, Dominic?”

My breath still in my chest, my hands nearly shaking at my sides. I wait for her next words, unable to look away.

“I need you,” she whispers.


For nearly the entire series, Camilla Landry, the youngest among the Landry brood, has been keeping her private life on the down-low, much to the consternation of her four brothers, even if her twin sister has her back. But that over-protectiveness is part of the reason Camilla has kept her affair with Dominic Hughes. If it's been going on for a year, though, would it still be considered an affair? As much as Camilla would like to call it a relationship, Dom seems to prefer thinking of it as a non-relationship consisting of regular hook-ups with the woman who's snagged--and kept--his attention all this time. This was only meant to be temporary. After all, a guy like Dom could never be a girl of Camilla's stature. He's being realistic and he knows this is going to end sooner or later. So, why is it that the longer they're together, the more both Dominic and Camilla wish they could let go of their apprehensions and make their fantasies of a possible happily-ever-after real? But will Dominic ever be able to win over all the Landrys?

In the first quarter or third of the novel, I wasn't a fan of Dominic Hughes's. He just came off as a guy who saw Camilla as nothing more than someone to warm his bed rather than warm his heart. Cheesy, I know, but you get what I mean. HOWEVER, after having finished the book, I find myself rather chagrined. You would think by now I would have learned my lesson about judging fictional characters in the first few chapters alone. Dom had his reasons for treating his non-relationship-though-it-really-was-one with Camilla the way he did, and I understood where he was coming from. Of course, both he and Camilla came into the whole thing with their own set of preconceived notions and assumptions about one another, but it was Cam who seemed to have gotten over hers far more quickly than Dom did. Again, Dom had his reasons and they were deeply rooted and long-held ones. Suffice it to say that the guy won me over...although there was a point close to the end that I wanted to smack him.

I adored Camilla! I'm glad fans and readers of the series got to see a different, more personal side to her in this, the final book in the Landry Family series. It's never been a secret that the Landrys have an unbreakable love for one another, but Cam proved that she's more than her nickname of Swink. She's got a lot of heart for her family and for people that she feels an affinity towards. Kudos, as well, that she wanted to push beyond the perfectly poised youngest Landry. Her feelings for Dom were real and when the time came for her to take a stand, she fought hard and she fought well. Of course, as much as I loved Swink, reaching the last page was bittersweet because I knew it was the end of yet another series that I couldn't get enough of. If you haven't heard, Sienna Landry will be getting her own story told but she'll be starting things off by way of a new series, The Gibson Boys. For now, I'll be relishing all the Landry goodness in the series and I'm just glad that it ended the way it began--with a five-plus-starred read. ♥