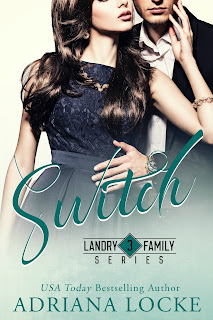 “What are you saying, Graham?” I ask.

I leap forward, pressing my lips to his. He winds me up in his arms, kissing me for all he’s worth. When we pull back, we’re smiling and breathless.

I do believe I've found myself my favorite Landry brother so far (though if I'm being honest here, Ford's had my attention from the moment he made his first appearance on my e-reader). Graham Landry is focused, ambitious, and tenacious. He knows what he wants, makes a plan, and goes for it with gusto. He likes to keep things organized, with everything in its proper place, both in his personal and professional lives. Unfortunately, without a reliable administrative assistant, Graham is desperate enough to consider hiring a friend recommended by one of his sisters. He expects her to do her job and to do her job well. What he doesn't expect is how Mallory Sims is about to knock his world off its axis. She's beautiful, capable, and intelligent and she'll push Graham just enough to get what she wants: HIM. Mixing business with pleasure makes for a tricky situation, but add to that the fact that Graham makes it clear that he can't be the kind of man that his two other brothers have become--someone who can promise forever--and the free spirit that is Mallory could end up becoming permanently grounded and broken.

Ah, Graham. The man was all anal retentive in the first two novels, but it was always clear how much he loved his family and how he was protective he was of them. I wanted to know what was lurking beneath those pressed suits of his and we finally get our answer with Switch, the third novel in author Adriana Locke's ongoing Landry Family series. Second son and second eldest sibling Graham is a naughty boy indeed and all it took was the introduction of someone like Mallory in his life. I loved watching the man unravel as he tried to make sense of the tornado-like effect Mallory had on him, with everything getting swirled around and he unsure of whether to hold tight and remain stuck or simply let go and see where he and his heart land. I liked that they were opposites and I found Mallory to be such a breath of fresh air because she wasn't annoying. I know that sounds weird but I've come across way too many female main characters who were too much of whatever they were supposed to be. Mallory was carefree but not careless, whimsical but not wacky, and she so owned her sexiness without being totally slutty.

Can I just say that I'm loving the Landrys? They're like the ideal family, not because they're perfect but because they're acknowledge that they aren't and love and accept each member while offering to be supportive in any way, shape, or form. We're three siblings in, and because this series is entitled Landry Family and not the Landry Brothers--as quite a few family-type series are wont to do even though there are sisters in the mix, coming off as an afterthought at times--I'm a little apprehensive because that means we're already halfway through the series! Gah! I'm definitely looking forward to Ford's story, which is up next, especially because it's looking like a second chance love story based on the clues I picked up on here. Of course, I could be totally off-base. Then there are the twins, who obviously have their respective caches of secrets that they're keeping from their parents, brothers, and each other. With Graham and Mallory's story checking everything off my list and leaving me with a silly smile on my face, the bar continues to be raised. Fingers crossed Adriana Locke brings it in Swear. Five-plus stars for Switch. ♥