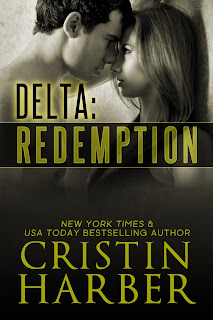 If you've read Locke and Key, the thirteenth addition to bestselling author Cristin Harber's Titan series, then Victoria Massey and Ryder Hall should be more than familiar to you. They finally get to tell their story in Delta: Redemption, the third release in the spin-off series, Delta. When Victoria's and Ryder's paths cross, it's as Ryder and the Titan and Delta teams come in to rescue Victoria and the others held by Russians engaged in white slavery. Vengeance was at her fingertips before Ryder stepped in. To him, she was the woman with no last name and with secrets that she wasn't prepared to share with Ryder. He wasn't one to press, not with him having his own secret that could very well have Victoria pushing him away. And Ryder? He wants the complete opposite. He wants to keep this enigmatic woman as close to him as possible. He's got her back and together, they're an invincible force.

Victoria may have suffered a great deal at the hands of her captors, but make no mistake, she isn't someone to be looked upon as a victim. The woman is a survivor and her journey back to the land of the living is at times harrowing but it's also a hopeful one because she refuses to let her past dictate her future. She's strong and focused and she was exactly the perfect person to be with someone like Ryder. She became his redemption, especially after his own dark past and the feelings of guilt that still linger within him. I felt for both of them, which is why I was rooting for them to get to their happy ending sooner rather than later (but hey, you can't rush a good book!). Fans of both the Titan and Delta books will be happy to note that familiar faces abound, plus we get an idea of who's story is up next, and it looks to be quite an exciting one, but then I expect no less from Cristin Harber. While you can read Delta: Redemption independently of Locke and Key, some events do overlap so, I'm going to go ahead and suggest you read the latter prior to the latter for a more well-rounded read. I'm giving this one 4.5 stars. ♥

Read my reviews for the Delta series: