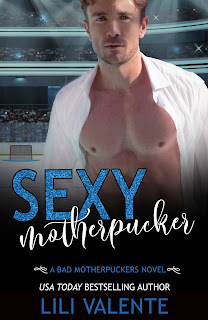 One weekend spent with a professional hockey player shouldn't have wrecked twenty-seven-year-old PR maven Laura Collins for all other men, but it did. Laura has it bad for Brendan Daniels, but the thirty-two-year-old widower, single father to seven-year-old Chloe, and captain of the Portland Badgers has decided to keep her in the friend zone. It's nothing personal, of course, but Brendan can't afford to be with someone he doesn't consider to be the kind of presence his young daughter needs. When Brendan's former in-laws, however, ask him and Chloe to spend some time with them, Brendan turns to Laura for help. What kind? Brendan needs a girlfriend--a fake one--and Laura fits the bill. They're friends, after all, and Laura would happily do anything for the man she's fallen for and the little girl who's stolen her heart. But when fake feels all too real, can they go back to being "just" friends?

Sexy Motherpucker is the second in Lili Valente's hockey romance series, Bad Motherpuckers. After the sneak peek at the prologue for this book found in the series starter, Hot as Puck, I had a feeling Laura and Brendan's story was going to be one worth reading and I was right. I do like a nicely written single dad story, though "nice" doesn't even begin to describe Brendan. His daughter Chloe is his world and while he doesn't envision himself finding "the one", he does want a steady and reliable woman in Chloe's life. With Laura being the free spirit that she is, Brendan doesn't really even consider her as a potential stepmom for his daughter. These two may have chosen to simply stay friends--well, more Brendan than Laura--after their hot weekend together, but that chemistry between them couldn't really be ignored all that long, especially not with them stuck together as a fake couple over several days.

You know how stories about fake relationships go, right? It's all fake in the beginning but all real by the end, and this second in a series doesn't have any shocking twists or revelations waiting in the wings. Everything I've come to accept from a story like this one remained front and present. That doesn't mean, though, that the story wasn't interesting. I still enjoyed reading all about Laura and Brendan, with them providing a lot of smile-inducing moments. There are the Lili Valented-patented steamy scenes with just enough sweetness to balance things out. Chloe was a scene- and heart-stealer, and I think Valente did a great job portraying her as a seven-year-old and not like some adult in kids' clothing that I've come across in other books before. So far, the Bad Motherpuckers series has left me quite satisfied and I look forward to reading Puck-aholic next! I'm giving Sexy Motherpucker four stars. ♥

Read my reviews for the Bad Motherpuckers series:

Hot as Puck (book one) - four stars - My Review