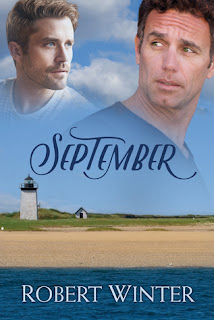 Well now... When I requested to read and review author Robert Winter's debut release, it was because I had the second novel in his Pride and Joy series already on my radar. With the release of book two and being the kind of must-read-in-order reader that I am, I had to go through September first, and while both novels are complete standalones, I'm so glad that I went ahead and read September because this definitely needs to be a must-read for readers of M/M romance. At its most basic, this is a May-December romance (one main character is forty-eight, the other is twenty-six), but there is so much more to this book than that "taboo" element. The more than two-decade age gap is just the first issue that David James and Brandon Smith have to deal with to find true happiness. Age may "only" be a number, but if they let it affect their romance could make or break them.

It's been a couple of years since David James lost his life partner to cancer, and since that time, David has been on a mission to fill his every waking hour making his law practice even more successful and working out at the gym, hoping the exhaustion will be enough to help him sleep. When he injures his shoulder, he's sent by his physician friend to a physical therapist. Brandon Smith, however, doesn't just help alleviate the pain in David's shoulder but offers to be his coach as he wades his way back into the dating pool. Their fun-filled moments together quickly progress into more, and both men enter into a new but promising relationship. But while things appear to go rather swimmingly in the beginning, when some in David's circle look down on what they have, seeing Brandon as nothing more than a young man after David's money, will they hold firm or walk away?

May-December romances, regardless of whether they involve straight or gay couples, is nothing new, but the author touches open the fact that the age difference is only the beginning of what a new couple like David and Brandon have to face. They're from two different generations, and that would be difficult enough to overcome, but then there's David being successful as a lawyer with his own practice and having made a fair amount of money over time and Brandon not having achieved as much in comparison. There's a moment in the story where I seriously wanted to shake David and have him act sooner to a situation, but in hindsight, he'd never fully and openly mourned Kyle, so I got why confrontations or being put in an uncomfortable situation that had a spotlight being focused on what he was building with Brandon had him frozen in place. It was heartrending.

This may be Winter's first published novel, but he clearly knew what story he wanted to tell and he told it with a mix of heartache and hopefulness. Both David and Brandon were undeniably human, making mistakes at times and there were moments they were quite frustrating, but damn, these two had me going all in with them. A couple of times, I felt my heart thump in my chest anxiously, but there is one particular point--one that I now call "The Letter"--that I couldn't stop the tears any longer. Sigh. And don't even get me started on the beginning and ending of the book because when it was revealed why they were written the way they were, I was seriously gobsmacked and let the "oh...my...GOD!" slip out. If his future releases are as amazingly written as September, then it's pretty safe to say that Robert Winter is going to be enjoying a long writing career. This gets five stars. ♥