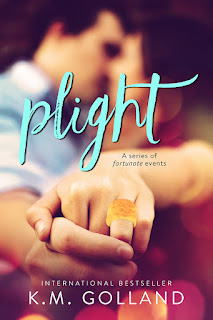 This book was such a great way to end one week and start another, considering I made the decision to begin reading it late into Sunday night and finished just after midnight. K.M. Golland is a new-to-me author and she offers up lighthearted romantic comedy fare with Plight, the story of two childhood best friends who shared countless happy memories and one harrowing event only to drift apart after one of them moves one town away. Danielle Cunningham and Elliot Parker were eight when he asked her to marry him with a Cheezel as the engagement ring. She ate it right off her finger and promptly said "yes" but with one caveat: they'd have to wait until they were thirty. Fast forward twenty-two years, one Facebook private message, and one worthwhile joint project later. Their friendship appears to have been rekindled but Elliot takes the promise they made at eight one step further, leading both him and Danielle into the sort of whirlwind created by a fake engagement. But he did propose and she did accept, so how fake could it be, right? Can Danielle and Elliot become friends AND lovers?

This standalone was witty, snarky, and with a dash of angst thrown in to make my angst-addicted (the fictional variety, of course!) self satisfied. I adored Danielle and her Lots! There was a bit of awkwardness as they took their first steps into rekindling their friendship. I think Elliot using the twenty-two-year-old childhood promise of marriage was sweet and the perfect excuse for him to touch base with Danielle. I mean, let's be honest here--no matter how close you guys may have been as children and young teenagers, too many years apart can, indeed, lead to one or both parties being unsure as to how to mend bridges. Elliot has his issues with self-imposed guilt and Danielle has her fear of abandonment, and while those don't come up until later in the story, they do provide the reasoning as to why these two expectantly stumble on their way to a happily-ever-after. Whether that means ending up at the altar or not, well, you'll just have to read the book. With two friends meant to be more, two excited moms, one doubtful sister, a Milo-making bestie, and a naughty pug, Plight hit lots of high notes. Five stars. ♥