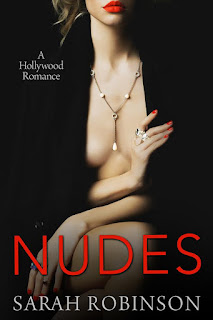 Nudes is the first in the Exposed series written by author Sarah Robinson. The blurb for the book now has a caveat of sorts, pointing out that it highlights the intersecting themes of sexualization and female empowerment, especially in a field like entertainment. This may be due in part to a number of reviews pointing out that they went into the series starter expecting one thing and getting something else based on the blurb. I happen to be one of those people who was drawn to the story based on the caveat-less blurb and only noticed the addition as I was perusing Goodreads for the necessary links for this book for the tour spotlight. My review and rating for the novel, though, remains the same, with or without that additional note to the book blurb. So, let's get on with it, shall we?

Aria Reynolds is an up and coming actress and being cast as the lead for Scarlet's Letters could be what pushes her into the kind of stardom and recognition that people in the entertainment industry work for. She doesn't want anything to detract from her work or to distract her on her goal, but the studio's new head, Ben Lawson, has her in his sights and it looks like the attraction is more than mutual. Theirs was supposed to be a love affair in the shadows, one that needed to be secret for more reasons than they wanted to admit. But everything about it felt real, even as secretive as it was, and Ben and Aria were in love. But while Ben saw Aria as his hope for something never thought he'd have, he may turn out to be the thing that destroys her and everything she--or they--has built.

The love story between Aria and Ben was interesting, one that has a taboo feel to it, what with Ben being Aria's boss. As much as they wanted to keep their affair on the down-low though, these two failed miserably at not cluing everyone else around them on what was really happening, so I'm guessing that subconsciously, they really wanted to shout out how they were feeling from the rooftops but instead let their actions speak for them. Now, as far as the leaked photos were concerned, I went to a high school and college that instilled in me to stand up for myself as both a woman and an individual, so kudos to Aria for not giving in to the shaming and sexualizing that was thrown her way. She refused to be a victim, so good for her. Nudes is a four-starrer about fighting for love and who you are. ♥