Review: The Master Will Appear by L.A. Witt 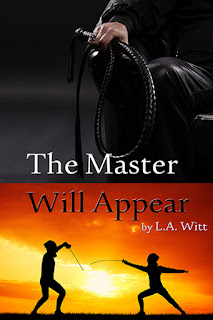 And it was even more than that. I wanted him to know how much I loved this. How much he turned me on. I was grateful for every welt and bruise, for every moment he made me spend on my knees, and as I gazed up at him, trying to blink the tears out of my eyes enough to see his face, I hoped he saw and felt that gratitude.

You keep me sane, I was trying to tell him. So I’m going to make you insane.

A few weeks ago, I read a book that involved a young man and his coach and how the latter used BDSM give his athlete a sense of purpose. The sex was hot but that was mostly what the book was about--the sex. Too much of a good thing is, well, not all that good. I want my books to do more than titillate. And then I come across author L.A. Witt's latest standalone release, The Master Will Appear, which is derived from the saying "When the student is ready, the teacher (master) will appear," whose origin has yet to be absolutely established. We have a young man whose fencing skills lack proper foundation, and a man who puts him in his place once ends up becoming his coach. I confess I was a bit wary. I had already been disappointed once with the previous book I mentioned, but Witt is an author who has rarely made me regret picking up one of her (or her alter-ego's) titles. Lo and behold, this book was above and beyond what I was expecting. Yes, BDSM was a major factor in the relationship between the main characters, but it wasn't limited to just that. Yes, there was lots of sex, but there was more to it than that.

When forty-five-year-old university professor Dr. Mikhail Budnikov glimpses the young man lacking the finesse and discipline required in a fencer, relying instead on too much aggressiveness and bravado, Misha pegs him for nothing more than a hotheaded wannabe. Misha quickly puts twenty-six-year-old college sophomore Ryan O'Connor in his place, which is exactly what Misha expected to happen. What wasn't expected was Ryan asking Misha to coach him and Misha unexpectedly agrees. As time passes, the lessons move from the piste to the bedroom, with Ryan's curiosity regarding Misha's BDSM lifestyle leading him on a path he never really saw for himself, but one that he discovers he revels in. Misha has never felt quite as strong a connection to someone else--whether man or woman, submissive or not--like he does with Ryan. He's intrigued by the fact that Ryan constantly hesitates to share much about himself, but the bits and pieces he gets show Ryan as someone who's never known much love in his life. So why should he ever believe a man like Misha would ever love a disappointment like him?

Ah, this story and these characters stole my heart. Who would have thought a BDSM novel could do that for someone like me who prefers romance to whips and cuffs? But I saw the romance in what Misha and Ryan were doing, even if dear jaded Ryan wasn't aware of it. These two, on paper, didn't look like they would last ten minutes together, but there was that...something...that inexplicable thing that made it clear with each passing page and chapter that they were, indeed, perfect for each other. Ryan's back story had me wishing I could give him a hug, and it highlighted that we don't really know someone or what they've been or may be going through. While Ryan and Misha do engage in an intimate, sexual relationship not too long after their first meeting, the love story itself is one I'd consider a slow burn and it made for a far better read, in my humble opinion. I get everything I wanted--and even things I didn't know I wanted--in this one novel, and it made for some of the most magnificent reading I've experienced ever. The Master Will Appear is my favorite BDSM romance and a five-plus-star recommend read. ♥

Purchase The Master Will Appear on Amazon.