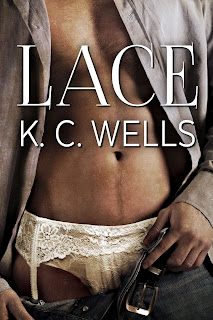 Lace is a novella written by K.C. Wells and it's a friends-to-lovers story between twenty-seven-year-old best friends Shawn and Dave. Shawn has been in love with Dave since they were sixteen, but he knows all too well that nothing can ever come of his feelings, not with his best friend being straight and in a relationship. But then Dave drops a bombshell--at least that's how it felt like to Shawn. Dave's months-long relationship has just ended. Oh, and he also happens to be bisexual. That doesn't mean, however, that anything is going to happen between them. But when Dave spies a particular article of clothing in Shawn's bedroom, curiosity has him asking Shawn to put them on and the line Shawn's be wishing they would cross? It's crossed over more than once. As thrilled as Shawn is at the turn of events, he can't help but worry. Is Dave only with him because of his lacy, silky kink or could it be more?

This isn't the first book I've read where one of the male main characters has a thing for lingerie, but I still found it to be an entertaining read. There was nearly as much focus on the whole lingerie kink as there was on the whole transition from friends to lovers, though I confess that there was a time or two that I felt Dave was overdoing it with giving Shawn lingerie. In the same thought process though, I also wondered if he was giving lingerie as a way to show Shawn that he was accepting and supportive of his best friend turned lover's kink. There's very little drama and angst in the story. These two could have gotten on with it had they just been open and honest with one another, but yes, I get that the fear of confessing their feelings could have ended up with them sacrificing the friendship they both cherished. A fairly hot and kinky quickie, and one I also consider GFY, Lace receives four stars. ♥