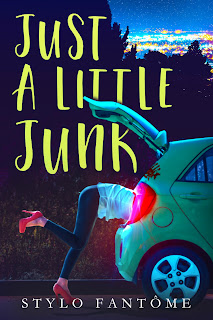 “Jojo,” he whispered, reaching out and brushing a lock of hair away from her face. She always looked young – whenever they went out, she got carded. She was young, though; and fragile. He'd tried for so many years to be her protector. Her defender. Her best friend. A guy she could always trust. A guy who might some day be worthy of her.


Ooh! I do love it when an author known for more heavily themed romance and erotica novels is able to surprise the hell out of me with something unexpected! I read the blurb for Stylo Fantôme's latest release and while I was immediately interested, a part of me held back, not wanting to expect too much. After all, this was a romantic comedy, or at least that's what it sounded like to me. My verdict? There was nothing "just" about Just a Little Junk. It was that bit of funk that I needed over the weekend, something to not merely tide me over, but something that wasn't run-of-the-mill. By the time I was done reading this standalone rom-com slash mystery suspense novel, I was wholly tempted to stand up and give it a standing ovation. It threw me for a loop in all the best ways possible.

Jodi Morgan wakes up not remembering most of what happened the night before. She definitely doesn't remember how a guy ended up in the trunk of her car. A dead guy. The same guy hitting on her. The same guy she used to hopefully make her best friend slash longtime crush maybe-kinda-sorta jealous. Now, she desperately needs that very best friend to help her make sense of what the hell has happened. If anyone has her back, it's Archer Calhoun--her older brother's best friend but over the years, as well as her brother's choice to basically leave everyone behind to pursue a life of his own. As they try to gather as many clues and as much information as they can, the details remain fuzzy. The one thing that becomes clear though? Jodi's crush may not be all that one-sided.

I'm not going to give any additional details other than to say that there's one hell of a major twist in the story, one that I never saw coming until it had smacked me in the face. The best thing the author's writing did to me? It lulled me into this feeling of complacency, making me believe that it was going in a pre-determined destination only to veer in a direction that was nowhere on the map I thought we were following. I enjoyed riding along on this misadventure of huge proportions that Archer and Jodi found themselves on, and before I knew it, I had already become attached to these two and wondered how they were going to finally move from being best friends to more. Just a Little Junk is one of the wittiest and most creative friends-to-lovers romances I've read. Five-plus stars. ♥