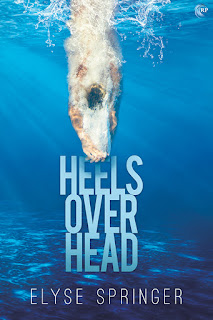 If you’d told me a year ago that I was going to enjoy diving with Brandon, let alone become a national champion for men’s synchronized diving with him, I would have laughed in your face.

Looking into his breathtaking eyes, another thought occurs:

If you’d told me a year ago that I was going to fall in love with Brandon Evans, I would have thought you were crazy.

Brandon smiles at me, and his joy is contagious.

And yet, here we are.

This book was EVERYTHING! Gah! Heels Over Head, a standalone M/M sports romance from Elyse Springer, isn't exactly a quick read, clocking in at nearly 300 pages in total, but time flew by and before I knew it, three hours had passed and I had fallen completely in love with the story of aspiring Olympic diver Jeremy Reeve and gifted but far less serious diver Brandon Evans. You would think with all the Olympic-related books I've already read over the past few months, I'd be sick of them by now. I am, actually. Bu then Jeremy and Brandon came along and BAM! I'm a fangirling mess still going through withdrawals more than twenty-four hours after reading their story. What have you done to me, Elyse Springer?! Not that I'm complaining. When I'm THIS into a book, it only means good things.

Two years. Twenty-four months. Sixty-four weeks. 730 days and nights. Endless hours of training. That's what stands between Jeremy Reeve and his dream of going to the Olympics--and his hope that this will be enough for his father and brothers to be proud of him. He's never allowed any sort of distraction to sway him before. That was before tattooed Texas native Brandon Evans showed up and seemed like he didn't have a care in the world. Brandon is nothing like Jeremy other than they're both twenty-one. Sure, Brandon may have raw talent, but he lacks discipline and focus; it's as if he couldn't care less if he won the appropriate number of competitions to make it to the Games. Oh, and he's gay...just like Jeremy. But while Brandon is out, Jeremy is not, making him a skeleton.

Brandon and his best friend call guys who are so deep in the closet "skeletons" and while Jeremy may think he's hiding his sexuality well, Brandon's gaydar is pinging. But the homophobia is more glaringly obvious, and matched with his less than hospitable welcome of Brandon and continuing cold treatment to his new teammate makes Jeremy difficult to have around. Not to mention the fact that Brandon has a crush on him. Yes, a crush on the guy who can't seem to last even a split of a second around him. But maybe he can get Jeremy to see that his world doesn't have to revolve around diving. That maybe he can also have a chocolate milk and actually have fun once in a while. And maybe, just maybe, he can convince Jeremy that being gay--and being with Brandon--isn't a bad thing.

One of my favorite things (and there are QUITE a few) about this book was how Jeremy and Brandon marked the monthly milestones from the moment they meet. As the story progresses, we see how Jeremy and Brandon's relationship evolves and devolves with how they label or describe the current month they're in. From it becoming all about the Olympics for Jeremy, you'll note when he recognized just how much his priorities changed. For Brandon, who more readily recognizes and acknowledges how his outlook has changed, it may have begun as his move from Texas to Ohio but transitions into far more later on. It may seem like a small thing, but I couldn't help but note those counting down of months to or up from milestones of sorts because they were a stroke of genius.

Rather than call this a slow burn romance, I think of this novel as a story of self-discovery and self-acceptance, which may make it seem as if it's all about Jeremy, but actually, it isn't. Yes, Jeremy has his issues, but so does Brandon--he just hides them better than Jeremy does. With the acceptance--both of self and things from other people, i.e. help--comes redemption and absolution, but to understand why, you'll have to read the book. It's about diving and falling in love and so. Much. MORE! My heart's all a-flutter for these two guys and that ending? I loved it, especially because it was hopeful and so not what I expected. I'm head over heels in love with Heels Over Head and I'm highly recommending this fab standalone, which is now one my favorite sports romances of this year. ♥