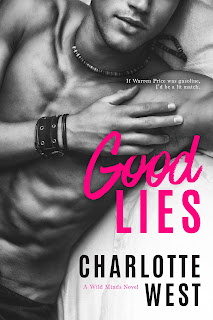 Note: This ARC was provided by the author via RockStar PR Lit in exchange for an honest review.


Good Lies is the debut release of Charlotte West and it's the first in her rock star romance series, Wild Lies. This was a fun read, one with a healthy dose of humor and just enough angst to balance things out. It's a second chance romance between rock royalty--Addison Wanks, daughter to rock legend Billy Wanks of Wanks and Janks--and one of rock's current stars--Warren Price, lead singer of Wild Minds. When Addy and War first meet, she's seventeen and he's nineteen; she's backstage at a Wanks and Janks concert and he's there with Wild Minds as the opening act. One make-out session lands them in hot water after they get caught by none other than Addy's father--she's on lockdown and sent to temporarily live elsewhere and his band is thrown off the tour. A year later, they reconnect and she follows him on his band's European tour, until she returns to the US in tears and nursing a broken heart. Four years later, Addy's father wants her back on a tour bus as Wanks and Janks does its farewell tour. The other headlining band? Wild Minds--meaning Addy's about to see War once again. Warren--her husband.

One of my favorite things about this book was that both Addy and Warren were not your stereotypical couple immersed in the world of rock music. Her back story is where a lot of the angst swirls around plus that of their roller coaster romance. Addy is twenty-two and War twenty-four when they end up together again on the Wanks and Janks and Wild Minds double headliner tour, so a lot of the missteps they make I chalked up to their being in their early twenties (not that I'm saying those in older age groups don't screw things up) and being impulsive and reactionary. That necessary connection--that chemistry--was there in spades and I couldn't look away from these two, whether it was in their lighter moments or when the mistakes of their past and present had to be confronted. Addy and Warren were undeniably meant to be and I thoroughly enjoyed reading their story. From the flirting and falling in love to the fumbling and fucking up, the one thing that remained constant between the two of them from the moment they met as teenagers was that theirs was more than a one-time things. Theirs was meant for forever.

Aside from Addy and Warren, readers are introduced to a host of other curious characters. There's Addy's father and her nanny--Billy and Daisy, respective--as well as the other members of Wanks and Janks--though only one is somewhat prominently featured. Then there's Wild Minds, made up of, aside from War, Asher Price (lead guitarist known as Ash and War's twin brother), Felix Hendrix (bassist known as Lix), and Derren (drummer whose last name wasn't mentioned and who used to be closest to Addy) who happen to be very protective of Warren. There's also Lily, Addy's best friend and Ash's ex, and Gabe Daniels, Addy's closest male friend and her ex. Oh, and did I mention there was a hot Scottish murse--a male nurse--named Kelly? This series starter was chock-full of interesting peripheral characters, and I wouldn't mind getting to know them even better as the Wild Minds series moves forward, with Billy and Daisy's as well as Ash and Lily's stories already slated as the second and third books. Suffice it to say that I was quite impressed with Charlotte West's maiden effort, and I'm giving Good Lies 4.5 stars. ♥