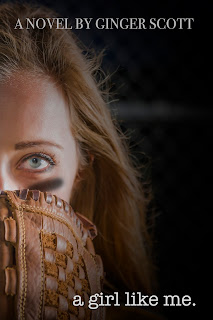 Note: This ARC was provided by the author via WordSmith Publicity in exchange for an honest review.

After that intense and frustrating cliffhanger Ginger Scott left readers with in A Boy Like You, we finally have ourselves the conclusion to her Like Us duology, and it was everything that I hoped it would and then some. I'll get to the "and then some" part later. Two things, though: you need to read the first book before even attempting to read this second one, and this review is going to be short because I'm not going to give any information--pertinent or otherwise--as to what happens to the main characters as their story concludes here. Book one lays the groundwork and makes readers see why what happens between Josselyn Winters and Wesley Stokes isn't your typical young adult love story, and there IS a cliffhanger, which basically clues you in that the two books ARE directly connected. And hey, they're well-written and intriguing, so do yourselves a big favor and read both novels.

Now, I know I said no details, but what I will say is that I loved how much Joss evolved as a heroine in this second book, and that was what she truly was--a heroine. She was smart and resourceful and refused to be told when something wasn't possible. I'd say I want to be her when I grow up, but I'm about two and a half times older than she is, so maybe that ship has sailed on my end. And Wes? Would I be a total pervy cougar when I say that this young man ranks even higher on my book boyfriend list than a host of other alpha billionaires, rock stars, sports superstars, and so on? If my heart broke for him in A Boy Like You, it was shattered into pieces for him here. Both he and Joss deserved their happily-ever-after and they deserved to have it together. Yes, yes, they're young and maybe circumstances will change as they get older, but I'm putting my cynical side on hold for these two teenagers.

Again, Ginger Scott has given readers a story that's worth the time you put into it. She tells a unique story and based on past experience, I knew it was going to be angsty. But I have thing for angst, especially since it almost always guarantees that things will work out in the end and everyone--well, at least the main characters and the reader--wins. I nearly gave this second book a five-plus-star rating, but you know when they say too much of a good thing is bad? Well, this had the expected twists, but it was a case of one twist too many, at least on my end. It just came off as being unrealistic and so now, I'm scaling back my rating for A Girl Like Me from where it was leading to to where it ended up, and that's at five stars. I don't think that's necessarily bad, right? With both books now available, spare yourself the heartache of the cliffhanger by having A Boy Like You and A Girl Like Me on-hand. ♥

A Boy Like You (book one) - five-plus stars - My Review