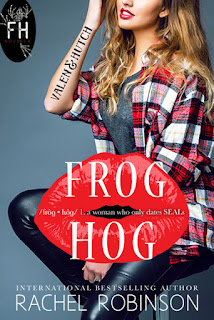 Note: This ARC was provided by the author via Sassy Savvy Fabulous PR in exchange for an honest review.

Rachel Robinson is a new-to-me author and Frog Hog: Valen & Hutch is my introduction to her writing. This is the first novella in her Frog Hog series and it's about twenty-seven-year-old Valen (whose last name was never mentioned in the book--at least as far as I can recall and a quick search on my Kindle app didn't come up with anything), and she's got a reputation for being a "frog hog". What's a frog hog, you ask? It's basically someone whose personal preference and main requirement in a sexual partner is their being a Navy SEAL (sometimes called a frogman). When she spots thirty-four-year-old Gabe Hutchinson, she hones in on the SEAL but doesn't seal the deal (pun intended). Hutch knows all about "that" Valen, and he isn't looking to be part of the long list of hookups she's engaged in. What he wants is the opportunity to pursue a relationship. Lo and behold, Valen is no longer to hook and reel in a SEAL for a temporary thing. Maybe their paths crossing is fate and they're meant to date and get to engage in "Honest Wars". But will their pasts get in the way of this reformed frog hog and SEAL's happy ending?

I wasn't really a fan of Valen's for the first few chapters of the book, though she did prove to be an entertaining female lead character as the story went on. I get why she became a frog hog and going into the book, I thought that was how she was going to be until she meets "the one". Thankfully, the author took this into a different direction from the get-go, with Valen already making up her mind about reforming her frog hog ways before she even directed her efforts on Hutch. Speaking of the SEAL with a secret--and I seriously didn't see that secret coming--Hutch was a man after my own heart, setting himself apart from the very beginning with how he handled that first meeting with Valen. Maybe he came off as a jerk to some, but he was brutally honest and wanted to make sure that he lay all his cards out on the table and needed Valen to do the same. The sexy times are truly sexy and the sweet snippets had me smiling. There aren't any wasted moments in the story, which was something I appreciated, and I enjoyed the four-starred read that was Frog Hog: Valen & Hutch. Looking forward to book two! ♥