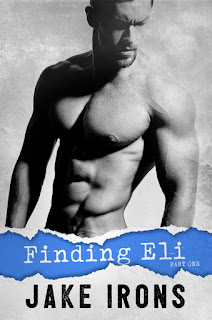 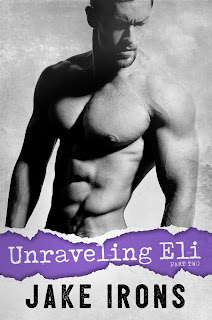 Note: These ARCs were provided by the author via Give Me Books Promotions in exchange for an honest review.

Jake Irons's debut release is a two-part erotic romance slash romantic suspense story with mafia elements. In Finding Eli, we meet Tara Daniels who is THIS close to losing her dream job--a job she's had for three years--at The Watcher, a newszine. One of her friends there suggests doing something that would guarantee the top brass keep her on: locate Eli Murphy. Eli is the newszine's co-founder and former editor who goes on to write a bestselling and award-winning novel entitled Mikey's Boys. He disappeared three years ago and no one seems to know where he is. A few convenient clues have Tara finding the elusive Eli and it's insta-lust. But Eli's in hiding for a reason, just like Tara has a reason for finding him, both of which come to a head in Unraveling Eli. Can Eli trust Tara when he learns the truth and will Tara still want to be with Eli once she finds out what exactly it is that he's--they're--running from?

Things got off to a pretty good start in Finding Eli, what with trying to figure out why Eli was in hiding and just how far Tara was willing to go to find him. I do think it was surprising that a newszine reporter, as intrepid as she may be, was able to find him while those who've been after him for three years never located the guy, but hey, reporters have been known to uncover secrets before from people far more powerful than Eli. Maybe Tara's like Bob Woodward and Carl Bernstein... Maybe. Anyhoo, the story was paced quickly and it does end on a cliffhanger. This brings us to Unraveling Eli, and I confess that I almost wanted to stop reading after the prologue. It was just...not all that great to read and didn't really serve that great of a purpose. However, I'm glad I stuck it out because hello, I wanted to see how everything wrapped up and while the beginning faltered, the rest of the book was okay. Finding Eli gets four stars and Unraveling Eli gets three stars, which averages out to 3.5 stars for the duet. ♥