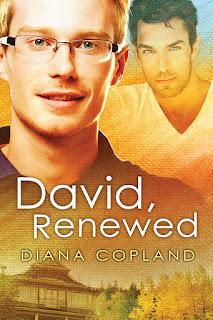 Heartbreak has led David Snyder to buy a new home on the very same street he grew up on. The craftsman looked like it was a steal, but soon, it was clear that calling it a "fixer upper" would be a kindness. While David's interior designing skills would be put to good use on making the house look good on the inside, he was going to need more able-bodied help to do the heavy lifting and reconstruction that the house required and then there was all the electrical and plumbing to boot. When his mother recommends a handyman named Jackson Henry, he isn't exactly sure what he expecting, but it sure isn't a hot guy with a tool belt who was more a master than a jack of all trades.

Jackson may be good at what he does, what with a solid track record in the construction firm he used to be part of, but being openly gay made it difficult for him to be the first choice of many a homeowner in his hometown. When David hires him to handle the renovation of the new home he's bought, it's exactly what Jackson needs in order to stay busy and to earn a living. They're hesitant with one another in the beginning, but the attraction is pretty much mutual and soon, they're spending even more time with each other. David's been burned before and Jackson's first priority is caring for his ailing mother, but if they give what they're developing a chance, it may even last a lifetime.

Oh, Diana Copland, where have you been all my life?! There was just something about David, Renewed, the first in her Delta Restorations series that so appealed to me. From the cast of characters headed by the too adorable for words couplehood of David and Jackson to a story that was about finding one's footing, whether it be in one's personal or professional life, and making a house into a home. There's also a bit of mystery suspense, something that I was not expecting but really liked. This was my first experience with Copland's writing, but this alone shows me what I've been missing and thank goodness I had book two ready and waiting. Five stars go to David, Renewed. ♥