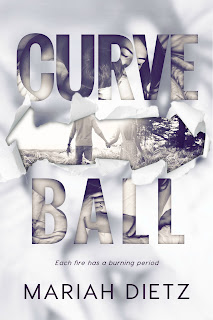 Curveball is the latest standalone contemporary romance novel from author Mariah Dietz and it's a small-town romance about a young woman who lives her life for her son but learns to let go and take a chance on love once again with a firefighter who starts off as a friend and becomes so much more. I've read two other Dietz-penned novels, but this new one, by far, is my favorite, and I humbly proclaim it the author at her best (so far). I like my angst, but there's such a thing as having too much of a good thing. This novel, however, had everything in perfect measure, almost as if she knew exactly what I needed to have in my hands at that very moment. Ella Chapman and Coen DeLuca's story is beautifully told, with twists that aren't thrown in to merely titillate but to enhance it even further and they're surrounded by a cast of characters that evoked potent emotions out of me. It was THAT good.

Ella Chapman fell in love with a man she believed was "the one"...except he already belonged to someone else. Still she remained in the town he lived in, hoping to create a life for herself and their son at the age of eighteen. People whispered, spreading rumors and swapping gossip about her, and still she stayed. Her mother and best friend encourage her to date, but it simply isn't happening for her, choosing instead to focus on her son Hayden. When Hayden's life is threatened by an allergic reaction, he's rescued by a firefighter named Coen DeLuca, and he's a man who could very well be the one to rescue Ella from her ho-hum love life. But how could she possibly give her heart to someone her best friend has her sights on? Maybe it would be best if Ella and Coen simply remain friends. But from the way he is with her and the way he dotes on Hayden, Coen could be Ella's ultimate curve ball.

There were moments in the story that I wanted to push Ella out of her comfort zone, to make her see that she could still have her happily-ever-after and that she didn't have to limit herself to what she had gotten used to. I wasn't a fan of the town she lived in mostly because of certain residents, but regardless of where you live--whether it be in the city or province or a small town--you're going to have at least one person who has nothing better to do than look down their nose at you and think they're better than you are. I loved reading about how Ella found her footing and how she became more than the girl who got pregnant by the married man. And Coen? Ah, Coen. Where do I begin with this guy? He was the ideal book boyfriend, a man who proved himself worthy of both Ella's and Hayden's love, respect, and trust. Do spend a few worthwhile hours with Ella and Coen in Curveball. Five stars. ♥