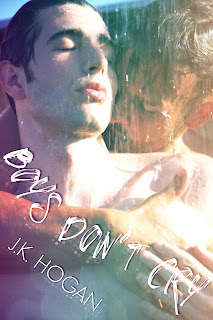 I had feelings for Laurie. What exactly to call them, I wasn't sure, but they were no longer deniable. I just had to figure out how and if I would be able to tell Laurie, because I had a feeling if I didn't say anything soon, he might get tired of waiting for me to catch up.

I received the advanced reader copy (ARC) for Boys Don't Cry just a couple of days prior to its release date (no thanks to my last minute decision to sign up!), and I was planning to wait till the weekend to read and review it, but it called to me and so I spent part of yesterday reading it and it was so much more than I was expecting it to be! This was my first foray into J.K. Hogan's writing, but it certainly won't be the last. She's given readers a wonderfully quirky and ultimately adorable unlikely love story between two men who start off as strangers then become awkward housemates and neither one isn't exactly looking to fall in love--especially not with one another.

Twenty-three-year-old Mackenzie Pratt is just weeks away from earning his degree in early childhood education, and he's in the thick of not only finalizing all his requirements for graduation but also prepping for interviews with several schools. So getting evicted with very little notice has him grasping at straws. There aren't a whole lot options for an unemployed college senior. But then his best friend opens the door to an opportunity that sounds too good to be true, if not rather weird. Thirty-five-year-old app developer and billionaire Laurent Beaudry may be a hermit and isn't the easiest person to live with, but as weeks go by, an unexpected kinship--and more--develops.

I admit that Laurie did come off as rather...ummm...weird in the beginning, but then I remembered that I have thing for weirdness because that often means they're extraordinary. And that's thing about this love story--it's extraordinary. Mackenzie is this young man about to start another chapter of his life, what with graduation and starting his first ever job, but that's not the only thing that's new about him. This was about discovery for him--about what and who he wanted, who he was, and the roles those closest to him played in his life. His sexuality and his feelings for Laurie were two things he had to contend with and accept if he wanted to be honest with himself.

Laurie was strange and he rubbed other people the wrong way, but goodness, did this man have a heartbreaking back story. No wonder he was the way he was with Mackenzie! He was like a butterfly coming out of the cocoon he had wrapped around himself, and I loved reading about how he came into his own with Mackenzie in his life. Aside from these two, Mack's best friend, fellow college senior, and Laurie's coworker, Taylor Morrison, was memorable, as was Mackenzie's older brother River. Both Taylor and River didn't seem to like each other all the much, but I wonder if something else could explain the tension between them other than mutual dislike. Do I smell a sequel?!

An additional bonus to this book was one supporting character who had Filipino heritage. I'm always tickled pink when I come across characters who are Filipino or are have ties to Filipino culture. The one hiccup had to do with the mention of a dish that was being served in the epilogue. It was called "poncit", but I'm guessing the author meant "pancit", which is the English spelling of a popular Filipino noodle dish generally named "pansit" (there are several varieties of this, all of which are quite scrumptious, but then I'm biased). Other than that, I loved every single thing about Boys Don't Cry and proved to be one of my favorite new reads for 2017. This gets five-plus stars. ♥