Review: Behind the Wall by Jane Harvey-Berrick 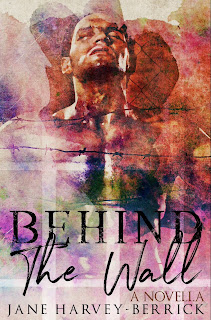 I first read Jane Harvey-Berrick's Behind the Wall in its original form as a part of the multi-authored Hot for Teacher anthology and was drawn by the original take the author had on the whole teacher-student romance theme. Harvey-Berrick is easily one of my favorite go-to authors because of how reliable she is when it comes to giving me a story worth my time, one that's guaranteed to be off-the-cuff while never losing sight of the whole romance aspect. With her release of Behind the Wall as an individual novella, she's added a couple chapters, and if I thought the original edition was impressive, even more so with this new, and dare I say, a more worthwhile reincarnation.

He was supposed to be no one more than Prisoner 97813--one of a handful of student prisoners that Ella Newsome was going to teach at the Nottoway Correctional Center. But from the get-go, there was something about the Dane Garrett that stood out. They were to be Miss Newsome and Garrett, but theirs was a connection that, while considered unacceptable and possibly even unsavory, couldn't be denied for long. A line is crossed, one that neither Dane nor Ella can ever step across again, no matter how much their common sense may tell them to. But what future can a convicted criminal and one caring teacher have in a world that views a convict as unsuitable?

The original edition ended on a hopeful note, but the author's tweaked it so that readers are able to see how Ella and Dane transition, not just from teacher and student to man and woman, but also as both part of the outside world. It's the additional chapters that have made this novella an even better read than it was, considering it was already a great read to begin with! Ella and Dane's story is the kind that makes you want to believe in the power of true love and how there are just some things--certain people--who are worth fighting for and standing by, regardless of the pushback. Behind the Wall is quintessential Jane Harvey-Berrick and is a five-starred quickie read. ♥

Purchase Behind the Wall on Amazon.