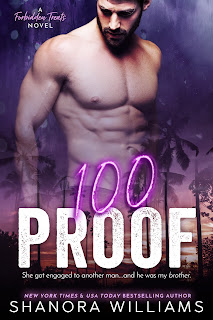 100 Proof is a standalone novel from author Shanora Williams and is my first read from her as well. It's touted as a taboo romance, though personally speaking, I don't really consider being engaged to be married to the brother of your ex as taboo. I mean, we've heard of the whole "bro code" wherein guys don't go after the exes of their friends; so what more when you're brothers. I, however, didn't have an issue because it wasn't as if the main characters were in a committed relationship at the time of the heroine's engagement with the younger brother of the hero nor did she actually know the familial--or any sort of--connection between her lost love and her fiancé.

Vincent Chambers and Marlena Winters met at a party trying to escape their respective worlds and fell promptly in love and became each other's world. But Vin's addiction got the better of him, leading to their end. Their paths cross again, but in the most awkward and shocking of circumstances. You see, Marley is now engaged to Lloyd Harris...who just happens to be Vin's half-brother. Of course, Marley had now clue that the guy she fell in love with three years ago--the very same one she still loves--is related to the guy whose engagement ring she now wears. Vin's now a recovering alcoholic, but is he too late to convince Marley that he's the brother she should be with?

The story pretty much follows the direction I expected it to, as stories similar to this are wont to do. I did like how Vin seeked redemption, struggling to achieve sobriety, not just for Marley but for his own peace of mind as well. I got why Marley felt she needed someone like Lloyd, though I do wish women would realize they don't need one particular kind of guy to give them some false sense of security. Vin's stepfather and brother were jerks and his mom, while not evil, needed more backbone. Overall, 100 Proof was a story that had familiar elements to it, but it did have a hero who was worth cheering for and swooning over. I'm giving this new standalone 3.5 out of five stars. ♥