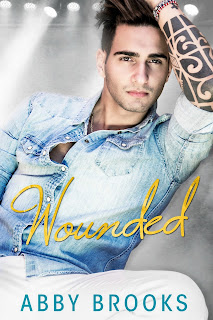 I've discovered two new-to-me authors and both have become authors for me to keep my bookaholic eye on. One of these authors is Abby Brooks and it was her new release, Wounded, which is the first in her Brookside series, Brookside being the small town where the stories are set. Here we meet pop superstar Liam McGuire and nurse Bailey Schultz. The two meet when Liam's tour bus becomes involved in a terrible accident that leaves many injured and Liam with a scar that runs from his forehead to his chin, marring the very thing that he knows makes him such a prime commodity--his gorgeous face. Bailey becomes Liam's nurse and she sees him as nothing more than an overly spoiled celebrity who thinks he's all that and that people around him are there to merely bow down to his every whim. Then she begins to get glimpses of the man behind the persona, and it's that version of him that she wants to get to know better. But Bailey knows what it's like to be left behind and with Liam being who he is, his leaving her isn't just a certainty; it's an inevitability. Can a fiery pop star and cool nurse ever get any happy ending?

This book made me laugh, but it also brought a few tears my way, a reaction I didn't expect but was very much warranted. Abby Brooks's writing almost makes me feel as if I'm sitting down with a group of close friends and we're all catching up with what's been happening in our lives. It's cozy and cute but don't doubt that it's also quite sweet and steamy. There's also a fair amount of angst, but it's the kind of angst that drives the story forward instead of trying to be nothing more than some distracting complication for one or both of the main characters to overcome. While I didn't quickly fall for either Liam or Bailey, I did find myself falling for these two AS I got to know them and their respective back stories as well as the tale of their developing relationship. Then there are the unforgettable supporting characters that had me wanting to get to know them better, which is why I was thrilled to find out that there are at least two more books waiting in the wings for me to devour. Wounded is the very first book by Abby Brooks that I've had the privilege of reading, but it's the first of many, I hope. This receives five stars. ♥